Flyers make ugly plunge from contenders to a mess in March

PHILADELPHIA (AP) — Shayne Gostisbehere came out swinging on the state of the Flyers, and the maligned defenseman sprinkled profanities in his R-rated critique of the team.

Seems appropriate these days in Philly. The Flyers are certainly NSFW: in this case, Not Suitable For Watching.

A crowd of about 2,800 inside a dreary Wells Fargo Center might be all that would turn out in a normal year given the record as the Flyers make the ugly plunge from preseason East Division favorite to a mess in March.

The trade deadline is April 12, but the Flyers might want to try and swing a deal for a tarp to cover the goal before Saturday’s home game against the New York Rangers. Rangers center Mika Zibanejad plays like Sidney Crosby against the Flyers and New York scores with the success rate of an empty-net drill when the rivals meet.

Consider, counting New York’s 9-0 win last week over the Flyers and its 8-3 win on Thursday, the Rangers scored 15 straight goals — 15! — against Philadelphia. Zibanejad had three goals and three assists in each of those games and became the first NHL player ever with six or more points in consecutive games against one opponent in the same regular season. He has only four goals and 20 points in his other 30 games.

The Flyers have lost four straight games, are 4-9-1 in March (allowing 4.64 goals per game) and goalie Carter Hart is 2-6. Hart has allowed 16 goals over a three-game losing streak and the Flyers are tied for fifth place with the Rangers in the East at 15-13-4 — the top four teams qualify for the playoffs — with 24 games left in a shortened season.

The Flyers have about two weeks to set the course for the franchise, for the rest of this season and beyond. Should the losses keep piling up, general manager Chuck Fletcher might consider trying to deal his veterans (minus captain Claude Giroux and Jake Voracek) to contenders. Should the Flyers straighten out, Fletcher might consider trying to shore up an ineffective defense that has played a crucial role in Hart’s struggles.

“We’re certainly not looking at selling right now,” Fletcher said this week. “If we can fill a box for the long term right now, we can potentially explore that. Certainly, if we can upgrade our team, we’ll do that.”

The Flyers were a trendy pick to come out of the East after last season’s strong finish in the NHL restart bubble. The Flyers had a nine-game winning streak before the pause, earned the No. 1 seed in the restart after round-robin play, won their first playoff series since 2012, then lost in the second round to the New York Islanders.

Hart led the way. He became the youngest goalie in Flyers history with a postseason shutout in Game 3 at 22 years, 3 days, and his second one made it the fifth time in NHL history a goalie had back-to-back postseason shutouts before age 23.

“I believe in Carter,” Fletcher said. “I believe in his talent and I believe he will be a very good goalie for this franchise for a very long time. Clearly, right now he’s not on top of his game.”

Brian Elliott (7-4-1, 2.97 GAA in a backup role) starts Saturday against the Rangers. The Flyers have allowed at least six goals in a game a whopping six times this season. Their 3.66 goals allowed per game is second-worst in the NHL.

Hart is just one player in a promising young core that has regressed this season, and coach Alain Vigneault has tried about all he can — from line switches to benchings — to squeeze production out of the roster. Defenseman Ivan Provorov and forward Travis Konecny are among the under-25 Flyers who failed to build on promising seasons last year and have the Flyers out of the playoff picture.

“Certainly, some of our young players haven’t played to the same level that they played last year,” Fletcher said. “I think long term, a lot of these players are going to be good players in this league for a long time. There’s been a lot of challenges this year. Certainly, we haven’t played as well as we wanted. I think it’s a year that you have to be a little bit careful though in overanalyzing the results.”

The Flyers, whose only Stanley Cup championships came in consecutive years (1974-75), have alternated making the playoffs every year since 2012. If the pattern holds, this would be a miss year — and they’re playing like it.

“This team has really lost its identity from where we were at the beginning of the year to where we are now,” Gostisbehere said. “It just sucks right now. We’ve gotta find something here because we’re too good of a team to … just squander it away.” 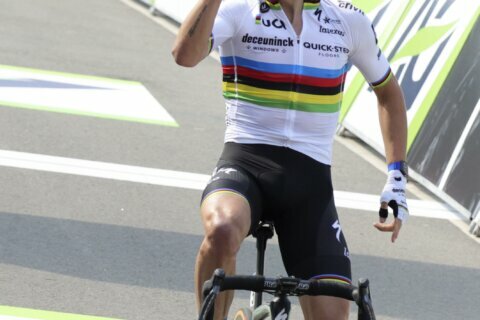