Cantlay getting a full dose of the intense golf he likes

AUSTIN, Texas (AP) — Patrick Cantlay has 14 birdies and an eagle in his two rounds at the Dell Technologies Match Play, and he needed every one of them just to get by.

No one is playing better at Austin Country Club. No one is having to work harder.

“You’ve got to expect it every time you tee it up in match play that the other guy could be hot,” Cantlay said after another 1-up victory Thursday, this one over Carlos Ortiz. “But I’m playing really well right now, so hopefully, tomorrow will be easier. But I don’t expect it to be.”

Cantlay was the equivalent of 9-under par in the opening round, which included holing out from 30 yards for eagle. And he still had to make an 18-foot birdie putt on the final hole to beat hard-luck Brian Harman.

It was just as intense against Ortiz.

The match was so tight that 15 of the 18 holes were halved. Cantlay took the lead with a wedge into 3 feet for birdie on the opening hole. They matched birdies on the fifth and sixth holes, and Ortiz tied the match on No. 8 when Cantlay made his only bogey of the week.

Cantlay took the lead with a wedge into 6 feet for birdie on the 14th.

“Both guys, both days, have played excellent,” Cantlay said. “I just played one shot better.”

He led the rest of the way, which is not to suggest it was easy. Cantlay and Ortiz each made 6-foot par putts on the 15th. Both got up-and-down for birdie on the par-5 16th — Cantlay from short of the green, Ortiz facing tougher pitch from behind the green — and made 5-footers.

Cantlay was the last to putt on every hole from the 13th through the 16th.

“All when I needed them,” he said. “And that feels really good. Making those putts in match play, that’s what it’s all about. So it’s really satisfying and gives me a lot of confidence going forward when you can make all those midrange putts, especially on holes when you need them.”

He still didn’t have the win wrapped up until Ortiz missed a 15-foot birdie putt on the final hole. Ortiz played bogey-free and made five birdies in his loss.

And now, it’s all about starting over. Cantlay is 15 under through 36 holes and would have the lead in stroke play. He starts all over Friday against Hideki Matsuyama.

“When I grew up thinking about playing, I liked playing when it’s intense like that,” Cantlay said. “So I think the more positive experiences you can have when it is intense and you do need to make putts and hit good shots, the more times you can pull that out, I think the more confidence you can take going forward.

“I’ll definitely be one of the most battle-tested by the time tomorrow rolls around.” 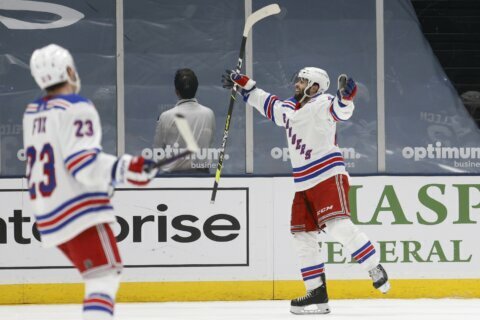 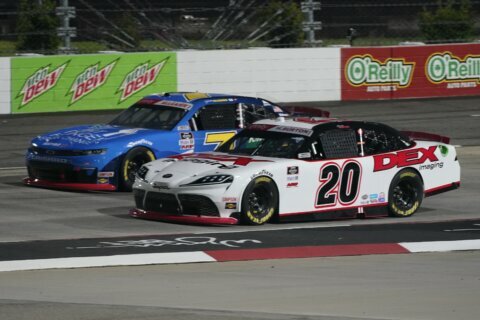 Rain pushes finish of Xfinity race at Martinsville to Sunday