MADRID (AP) — Athletic Bilbao will have a chance to win two Copa del Rey titles in a two-week span next month.

The Basque Country club reached this season’s final on Thursday by defeating Levante 2-1 in extra time, setting up an April 17 final against Barcelona, which advanced past Sevilla on Wednesday.

First, on April 3, Athletic will face Basque rival Real Sociedad in last season’s final, which was postponed because of the coronavirus pandemic.

Álex Berenguer scored the winner seven minutes into the second half of extra time to eliminate Levante, which was trying to reach its first Copa final. The teams drew 1-1 in regulation, repeating the score from the first leg in Bilbao.

This season’s final will feature the two most successful Copa clubs. Barcelona is looking for a record 31st title, while Athletic will try to lift the trophy for the 24th time.

Athletic beat Barcelona in the 2015 final for its last Copa title. Barcelona won the tournament for the last time in 2018.

Levante had not reached the semifinals since 1935.

Both teams missed chances to score a winner in regulation, and Berenguer decided the game with a shot from outside the area that deflected off a defender and hit the post before going into the net.

Roger Martí had put the hosts ahead with a goal from close range in the 17th, and Athletic equalized with a penalty converted by Raúl García in the 30th.

The teams also met in Valencia last weekend in the Spanish league, drawing 1-1.

Athletic hasn’t lost in its last six matches in all competitions, but earned only one other victory during that streak — at Cádiz in the Spanish league. The other four matches had also ended in 1-1 draws.

Levante won a 1937 tournament that replaced the Copa del Rey during the Civil War, but the Spanish soccer federation doesn’t recognize it as a Copa title. 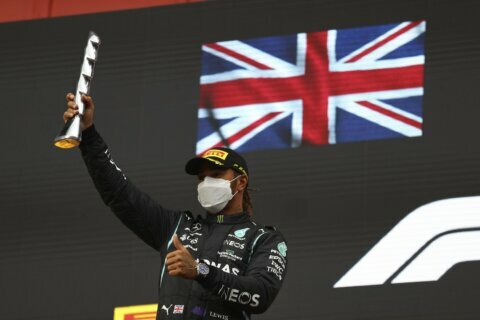