He did it with goals, too, like his teammate in central defense has often done recently.

Varane scored twice in the second half to help the defending champions come from behind to win at last-placed Huesca 2-1 in the Spanish league on Saturday.

“It had been a while since I had scored for Madrid,” said Varane, who just completed a year without finding the net. “You need to keep having faith. When the ball is in the attack I try to move forward and today I could score.”

Ramos earlier Saturday underwent surgery on a left-knee meniscus that had been bothering him. He is expected to be sidelined for about six weeks.

The victory moved Madrid back into second place in the standings, closer to league leader Atlético Madrid, which visits struggling Celta Vigo on Monday. Madrid trails Atlético by seven points and is one point in front of Sevilla, which routed Getafe 3-0 later on Saturday. Barcelona, which is at Real Betis on Sunday, was fourth.

“We showed great character rallying for the win,” said Real Madrid coach Zinedine Zidane, who was back on the bench after being out following a positive coronavirus test.

Among Madrid’s recent setbacks were a loss to Athletic Bilbao in the semifinals of the Spanish Super Cup and embarrassing elimination by third-division club Alcoyano in the Copa del Rey round of 32.

“It was a very important victory, we needed to change our dynamic and regain confidence,” Varane said. “When things get tough we see the character of this team.”

Another setback was on the cards when Huesca scored from Javi Galán’s shot into the top corner following a 48th-minute counterattack. The hosts twice hit the woodwork while leading but Madrid equalized with a close-range header by Varane in the 55th after Karim Benzema’s free kick struck the crossbar.

“It was a shame that they equalized quickly with Varane’s goal after a great free kick taken by Benzema,” Huesca goalkeeper Álvaro Fernández said.

Varane added his second from close range in the 84th after a header by Casemiro. It was the second double for the Frenchman with Madrid.

Madrid goalkeeper Thibaut Courtois made some key saves to secure the win for Madrid, whose injury list was added to by Álvaro Odriozola in the second half because of an apparent muscle problem.

Sevilla defeated Getafe with second-half goals by Munir El Haddadi, Youssef En-Nesyri and Papu Gómez, who made his debut after joining from Atalanta.

The match was marked by an altercation between Sevilla coach Julen Lopetegui and Getafe manager José Bordalás after a hard second-half tackle by Getafe defender Djené on Sevilla forward Lucas Ocampos, who left the field on a stretcher with what appeared to be a serious left ankle injury.

Both coaches were sent off after arguing heatedly on the sidelines. Lopetegui later apologized for his behavior.

Second-to-last Elche rallied from two goals down to draw with fifth-placed Villarreal 2-2. Guido Carrillo and Lucas Boyé scored second-half goals after Gerard Moreno put the visitors ahead with a double within the first 35 minutes. 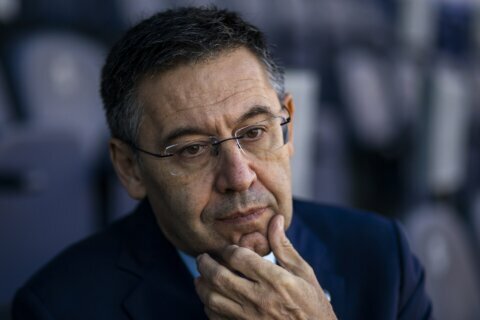 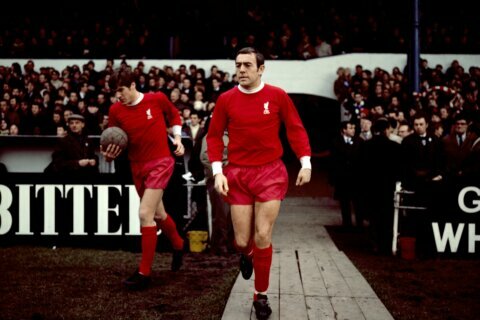 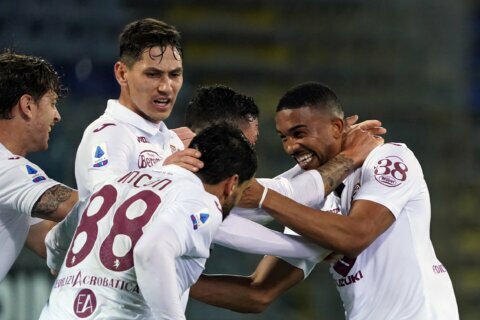