CORTINA D’AMPEZZO, Italy (AP) — Italian veteran Christof Innerhofer ascended at “the pace of a retiree.” Teammate Dominik Paris acted as if he had won a medal, raising his huge arms in celebration and letting out a scream when he reached the top.

The 223 steps required to get to the start house of the new men’s downhill course at the skiing world championships gave athletes who are more accustomed to descending mountains at breakneck speeds a new challenge.

“We train in summer normally just for going down but here it’s also for going up,” Germany’s Thomas Dreßen said after Sunday’s race, which was won by Vincent Kriechmayr of Austria.

After riding the chairlift to the hospitality tent, the trek to the top starts with a narrow goat path cut into rock. After another 150 meters (yards) of uphill walking through the snow, the steps start in earnest.

It’s mostly a straight shot all the way up on the endless set of stairs set up on scaffolding. The final 15 steps are cut into the snow — with no railing.

Organizers have shied away from installing a new chairlift to protect the environment so close to the mountain peaks.

“I love climbing and being in the mountains and ski touring. It has that similar vibe. But hiking in race boots when it’s minus 20 degrees is really tough,” American downhiller Travis Ganong said.

While some racers swapped their ski boots for regular shoes, Ganong was not one of them.

“If I take my boots off when it’s this cold I can’t get them back on. They get too stiff,” he said. “So I don’t know how those guys were doing that.”

Technicians had the worst of it, having to carry up multiple pairs of skis and other equipment for their racers.

Photographers carrying backpacks with 15 kilograms (more than 30 pounds) of equipment had a rough time, too.

The altitude at the top of the aptly named Vertigine course, which translates as “vertigo,” is 2,400 meters (nearly 8,000 feet).

“It’s like you’re actually part of the mountain. You got to work for it a little bit,” said Bryce Bennett, another American competitor. “I kind of like that. And then you’re at the base of that super cliffed-out mountain. It’s just an incredible place.”

Known as the “Queen” of the Italian Dolomites, Cortina has rock outcroppings, scenery and spectacular panoramas.

“We’re focused on the race but the view is pretty special,” Ganong said.

The women’s downhill that runs next to the men’s course is famous for the Tofana Schuss, a chute between two cliffs.

The Vertigine course could be used for the 2026 Milan-Cortina Olympics. While the men are currently slated to race in Bormio during the games, the International Ski Federation would like to have both men and women compete in Cortina.

Racers had to plan ahead to give themselves enough time to complete the hike.

“The race in a way starts from there,” Innerhofer said. “Yesterday I left hospitality one hour before my start and I reached the top 17 minutes before I started. So I had the pace of a retiree.”

That calculates to 43 minutes of climbing for Innerhofer, who needed less than 100 seconds to descend the course during the race and finish sixth.

“It’s definitely nicer to go down,” added the 36-year-old Innerhofer, who lives an hour away from Cortina. “I like climbing mountains but I don’t walk much because I’ve got a bad back and bad knees. I prefer using a bike.”

“If you’re speeding it up you get a little bit of extra training,” Jansrud said. “So something in between without getting that lactic acid up too much.”

There was a similar setup for the start of the men’s downhill at the 2017 worlds in St. Moritz, Switzerland, but “this one is a much, much longer climb,” said Ganong.

The tight space at the top of the stairs made for a lot of people close together, which created some concern amid the coronavirus pandemic.

“We’re all athletes. It’s fine to hike a little bit. They just need to build a big platform up there,” Ganong said. “They kind of threw all the caution to the wind.” 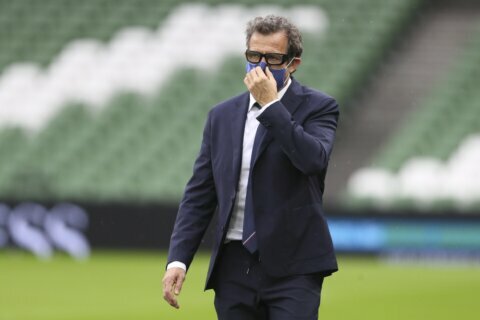