CORTINA D’AMPEZZO, Italy (AP) — Katharina Liensberger was talking to reporters in the mixed zone when she learned that her silver medal in the parallel vent had been upgraded to a tie for gold at the Alpine skiing world championships.

The Austrian fell to the snow in celebration.

“I just cannot believe it, but it’s true,” Liensberger said. “I was a little bit confused in the finish.”

There was plenty of confusion to go around as the parallel event made its debut at the world championships.

The format with skiers competing side by side on giant slalom-like courses is a TV-friendly spectacle meant to add more excitement to the championships. But the event has seen so many rule changes over the years that even organizers needed some time to sort out how to divvy up the medals.

The women’s two-run final between Marta Bassino and Liensberger ended in a tie, and organizers initially declared the Italian the winner as she came from behind in the second leg.

However, that was an old rule which isn’t valid anymore. So the results were quickly changed to having two co-champions.

“Just 0.00 (on the clock), and then nobody knew what was going on,” Liensberger said.

There was no confusion over the result in the men’s final, where Mathieu Faivre won both runs against Croatian skier Filip Zubcic to earn France its first gold of the worlds.

Bronze in the women’s event went to France’s Tessa Worley, who defeated Paula Moltzan of the United States.

“My best at world champs before this was (18th), so fourth is incredible,” said Moltzan, who finished runner-up in the only World Cup parallel event this season in November.

Why is Moltzan doing so well at parallel races?

“I like the start gates,” she said. “As athletes we’re all super-competitive so I think this is an interesting way to bring it out of everybody and I had a lot of fun. I just like it.”

Loic Meillard won bronze for Switzerland in the men’s race after beating Alexander Schmid of Germany in the small final.

A qualification round had reduced the field for both races to 16 skiers, with Petra Vlhova, Lara Gut-Behrami and Marco Schwarz among the most notable eliminations in that early morning session.

“I think we all really like racing it,” Shiffrin said. “It’s more of a sort of tournament-style atmosphere, it’s just sort of electric for the whole race. There is not like any downtime for the viewers.”

Still, racing the parallel event at these worlds has never been an option for the American, mainly because she lacked time for the specific training required because of the unique start gate and course set.

“I do like the parallel event but it’s still a difficult event to plan logistically. Even now there’s definitely some things to sort through,” Shiffrin said. “The list of logistics that kind of create an issue is pretty long.”

Which showed in Tuesday’s race.

Once again at a parallel race, the two courses were not equally fast, with almost all runs won by the skier on the red course. The racers switched sides between runs, so they had one go at each course, but it was an advantage to have the faster course for the second run.

“It was the most unfair and absurd race,” said Federica Brignone, the overall World Cup champion, after losing an all-Italian quarterfinal to Bassino. “Whoever started on the blue course in the first run had already practically won.”

Bassino acknowledged “there’s always some controversy in parallel. But at least today everyone got to run on both courses.”

“Finally. We don’t have the crowd but now I have a medal so I can think (about) the GS without pressure,” said Bassino, who is a favorite in Thursday’s giant slalom after winning four World Cup races in the discipline this season.

Bassino dedicated the win to her team and injured teammate Sofia Goggia, the downhill standout who is out for the season after injuring her knee a week before the worlds. 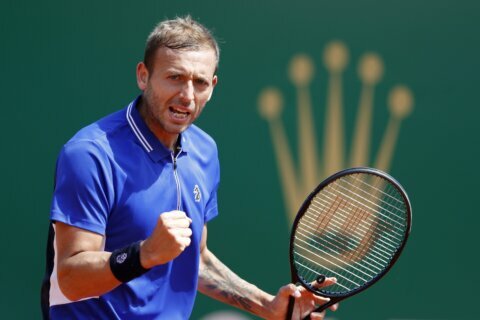