PARIS (AP) — The French soccer league will ask the government to set up a financial rescue plan amid huge revenue losses caused by the coronavirus pandemic and the collapse of its television deal.

The LFP, following a meeting of its board on Tuesday, called for an urgent meeting with government agencies, saying in a statement that “to date, losses already amount to more than 1 billion euros.”

The urgent appeal comes despite the league securing a new deal with broadcaster Canal Plus to show matches in the top two divisions for the rest of the season. The agreement with Canal Plus was signed after the deal with Spanish-based broadcaster Mediapro collapsed.

The league said these losses in TV income, combined with the impact of matches played without fans due to the pandemic, will further damage the clubs’ financial health. The losses are more than $1.2 billion, it said.

The 100 million euros ($121 million) for professional clubs already adopted by the French government is not enough to help them survive the crisis, the league said.

It asked for a meeting with officials from the ministries of sports and finances.

The league said it is not asking the government to compensate for the drop in TV revenue.

“The clubs have already made great efforts to adapt to this major drop in income, both through wage negotiations with players and reforms that the (league) is preparing to guarantee its future,” the league said.

“However, it is essential for the state to participate in helping professional clubs and their shareholders to overcome the emergencies that the COVID-19 crisis has created.”

Under the deal with Canal Plus, the broadcaster has exclusive rights for all first-division games and eight matches from the second division from the 25th round of matches starting this weekend. No financial details were given, but French reports said Canal Plus paid 200 million euros ($242 million) for the rest of the season.

The deal with Mediapro should have been worth more than 4 billion euros ($4.8 billion) over four years for the top two leagues but collapsed after just four months.

In December, the league was forced to terminate its contract with Mediapro, which created a new subscription channel called Telefoot to show matches but missed scheduled payments worth more than 324 million euros ($392 million) before the plug was pulled. Mediapro then agreed to pay 100 million euros ($121 million) in exchange for relinquishing its rights to games. 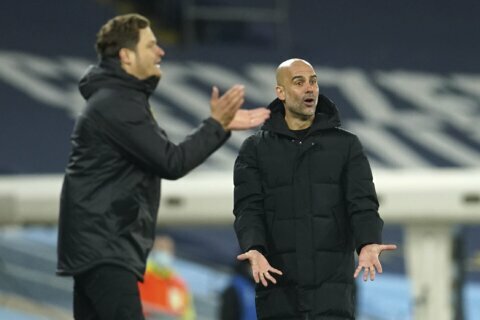