BERLIN (AP) — Borussia Dortmund slumped to another Bundesliga defeat, 2-1 in Freiburg to lose more ground in the race for Champions League qualification on Saturday.

Quick-fire goals from Jeong Woo-yeong in the 49th minute and an own goal from Dortmund goalkeeper Marwin Hitz in the 52nd saw the visitors lose their eighth game in 20 rounds and drop three points behind Bayer Leverkusen in fourth, the last qualifying place for Europe’s premier competition.

“We again made mistakes that shouldn’t happen,” Dortmund coach Edin Terzić said after their third defeat in four league games.

Leverkusen’s 5-2 win over Stuttgart was capped by new signing Demarai Gray’s first goal on his Bundesliga debut after switching from Leicester.

Kerem Demirbay scored twice to put Leverkusen on course before Sasa Kalajdzic pulled one back in the 50th.

Leon Bailey made it 3-1 though there were justified complaints from Stuttgart that Timothy Fosu-Mensah should have been penalized for hand-ball at the other end. The Dutch defender stopped Kalajdzic’s effort with his arm.

Bailey, Patrik Schick and Moussa Diaby were involved before the 17-year-old Florian Wirtz headed Leverkusen’s fourth, and Gray killed the game in the 84th after Kalajdzic scored his second.

“We had to win,” Leverkusen coach Peter Bosz said after his team bounced back from three successive defeats.

Two goals from Elvis Rexhbeçaj — early in each half — led Cologne over Borussia Mönchengladbach 2-1 in the Rhine derby.

Gladbach star Florian Neuhaus pulled one back but a botched backpass from Stefan Lainer gifted Rexhbeçaj for what proved to be the winner.

Cologne moved four points clear of the relegation zone after its first back-to-back wins this season, while Gladbach missed the chance to move above Dortmund and keep pace with Leverkusen. Gladbach remained seventh, behind Dortmund on goal difference.

MUSTAFI IN THE DEEP END

Former Germany defender Shkodran Mustafi made his Schalke debut despite not training with the team after joining from Arsenal, but his new team lost at home to second-placed Leipzig 3-0.

Schalke remained last and a firm candidate for relegation with just one win and eight points from 20 games.

“If we play with concentration and engagement we can have hope,” Mustafi said.

Union defender Nico Schlotterbeck conceded a penalty that Moussa Niakhaté converted in the first half, before he was sent off for his second yellow card early in the second.

“We’re not doing these little things right at the moment,” Union coach Urs Fischer said after his third loss in four games without a win.

Bayern Munich, which consolidated its lead beating Hertha Berlin1-0 on Friday, was forced to wait overnight for its flight to Doha, Qatar, for the Club World Cup after missing a midnight cutoff for flying from Berlin Brandenburg Airport. 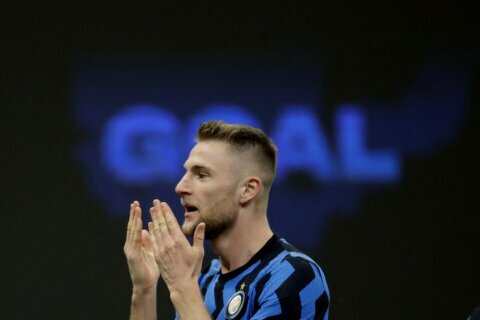