NEWCASTLE, England (AP) — Four days after losing 9-0 for the second time in 15 months, Southampton produced another ragged defensive display to lose to a Newcastle side 3-2 that ended the English Premier League match with nine men on Saturday.

Newcastle scored three in the first half of a top-flight match for the first time since 2015 to lead 3-1 at halftime, with Miguel Almiron netting twice after the opener from Joe Willock on his debut.

Takumi Minamino, another player making his debut after a deadline-day move on Feb. 1, replied for Southampton for 2-1, and the visitors pulled it back to a one-goal deficit again when James Ward-Prowse scored off a stunning 30-meter free kick in the 48th.

Jeff Hendrick was sent off two minutes later after receiving his second yellow card for a pull of the jersey, and Fabian Schar was carried off in the 78th — by which time Newcastle had made three substitutes because of previous injuries to Callum Wilson and Javier Manquillo.

However, Newcastle held on despite waves of Southampton pressure that saw Danny Ings strike a shot against the post.

Just like in the record-tying loss at Manchester United on Tuesday, Southampton’s players were their own worst enemies at times.

Jan Bednarek scored an own goal and was later sent off against United — though the red card was overturned — and he turned the ball into his own net against Newcastle, too, from a goal-bound shot from Almiron to make it 2-0 in the 26th.

Then, Southampton goalkeeper Alex McCarthy delivered a slack pass out from the edge of his area that led to Ryan Bertrand getting dispossessed and Almiron scoring his second in first-half injury time. 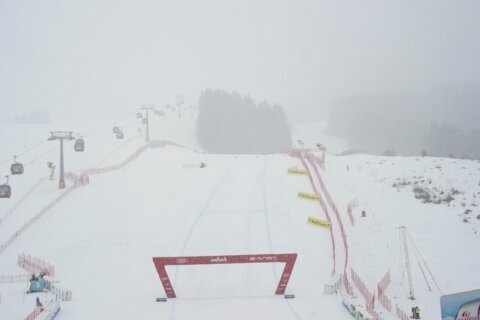