Salah ends EPL drought, Liverpool back as threat to City

With a trademark left-footed curler into the top corner and the deftest of finishes from a clinical counterattack, Mohamed Salah…
Listen now to WTOP News WTOP.com | Alexa | Google Home | WTOP App | 103.5 FM

With a trademark left-footed curler into the top corner and the deftest of finishes from a clinical counterattack, Mohamed Salah ended one of his longest goal droughts in the Premier League for Liverpool in style.

The champions’ chief scorer is back doing what he does best. And that should make them the biggest threat to relentless leader Manchester City in the title race.

Salah’s sublime, second-half double set Liverpool on its way to a 3-1 win at West Ham on Sunday, which backed up a victory by the same scoreline at Tottenham on Thursday.

Jurgen Klopp’s team hadn’t won any of its previous five games and had dropped off the remorseless title pace being set by City, which has won eight straight league games.

Despite its lengthy injury list — and Sadio Mane joined it this week because of a minor muscle problem — Liverpool cannot be discounted, even if the third-place Reds are four points behind City having played one game more in their turbulent title defense.

They jumped above Leicester, which lost 3-1 at home to Leeds earlier Sunday and dropped to fourth. Sixth-place Tottenham also lost 1-0 at Brighton.

“It was a really big week.”

Salah scored twice in an FA Cup loss to Manchester United last weekend, but he hadn’t netted in six league matches, a barren run he had only experienced once — in February-March 2019 — since joining Liverpool in 2017.

The Egypt forward attributed some of that to technology — “I don’t like VAR,” Salah said after the West Ham game, “it just kills the game, the joy of football.”

But there was no stopping him at the Olympic Stadium.

His opener in the 57th minute was classic Salah, twisting and turning as he came in from the right before bending a shot into the far corner beyond goalkeeper Lukasz Fabianski.

His second goal in the 68th was even better as he controlled a high, hanging pass from Xherdan Shaqiri with his weaker right foot and poked home a finish with his left.

“The first touch was unbelievable,” Klopp said, “then the fine finishing touch.”

Georginio Wijnaldum added a third off a well-worked team move in the 84th before Craig Dawson grabbed a consolation for an outclassed West Ham.

However well Liverpool plays in the second half of the season, it will need City to drop its stunning levels of late.

For Klopp, ideally that happens next weekend when City visits Anfield.

Missing injured striker Harry Kane, Tottenham struggled for creativity and cutting edge up front in a 1-0 loss at Brighton that left Jose Mourinho’s team six points off the top four.

Leandro Trossard scored the only goal of the game in the 17th minute as fourth-from-last Brighton moved seven points clear of the relegation zone.

Kane, who has 12 goals and 11 assists in the league, hurt both ankles against Liverpool and was replaced in the attack for the Brighton match by Gareth Bale.

The on-loan Wales winger underwhelmed in his first start in 12 weeks and lasted just 61 minutes before being substituted.

In his first season as a regular Premier League starter, Patrick Bamford is dispelling the notion he is a wasteful finisher.

The Leeds striker is up to 11 goals this campaign after smashing a fierce shot into the far top corner for his team’s second goal in the come-from-behind win at Leicester.

Capping an impressive individual performance, Bamford set up goals either side for Stuart Dallas and Jack Harrison as Leeds recovered from conceding a 13th-minute opener to Harvey Barnes.

Bamford was a Chelsea player from 2012-17 but spent most of that time on loan to lower-division teams and has been widely regarded as a hard-working but profligate striker.

Leicester could have climbed to second place with a win but lost for the second time since Nov. 30.

Chelsea picked up its first win under newly hired coach Thomas Tuchel by beating Burnley 2-0 thanks to goals by Cesar Azpilicueta and Marcos Alonso.

Like in his debut after replacing Frank Lampard — a 0-0 draw against Wolverhampton on Wednesday — the German coach deployed a three-man defense with two sitting midfielders and high wing backs.

Those wing backs played significant roles in the goals, with Callum Hudson-Odoi — on the right — setting up Azpilicueta for the 41st-minute opener and Marcos Alonso — on the left — lashing home a volley after a receiving a pass from Christian Pulisic.

A recovery under Tuchel might be too late for Chelsea to challenge for the title, though, with the London club 11 points behind City. It next faces Tottenham on Thursday. 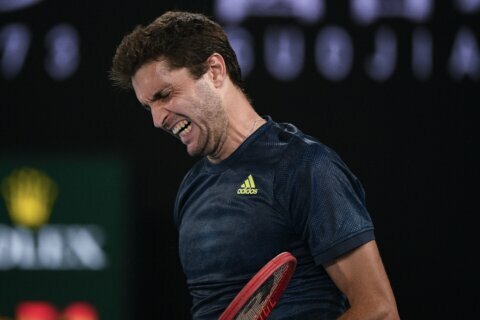 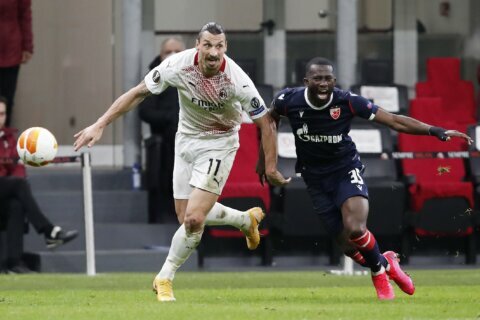