Juninho persuaded Paolo Maldini, who played 900 games for Milan and is now the club’s technical director, to sell midfielder Lucas Paqueta to Lyon for 20 million euros ($24.5 million) in September.

It has proved the signing of the French season, with Paqueta the driving force in a Lyon side three points clear at the top and heading into Saturday’s trip to Rennes unbeaten in 15 games.

While the slick attacking trio of Memphis Depay, Karl Toko Ekambi and Tino Kadewere have shared the goals, Paqueta’s role in a three-man midfield has provided lightning-fast breaks forward and an excellent screen in front of defense.

Take Wednesday’s 3-2 home win against Lens, where Paqueta’s astute pass was played so quickly it caught Lens out and Depay read it perfectly to open the scoring. It was also Paqueta’s first-time through ball that led to Maxwell Cornet earning a penalty to make it 3-0.

“He is a formidable talent, but even more than his talent and ability to play with one touch going forward, he works hard for the team,” Lyon coach Rudi Garcia said. “All the credit goes to Juninho.”

Juninho is now Lyon’s sporting director. He scored 100 goals for the club from midfield, including some spectacular free kicks from 40 meters, and was instrumental in seven straight championships from 2002-07 — a run of titles big-spending PSG has never achieved.

Paqueta is a different, more direct style of midfielder compared to how the more skillful Juninho operated. He is more about high stamina and strong tackling, a box-to-box runner who honed his assured technique back home in Brazil.

His dynamic, galloping running style and athletic physique led observers to make early comparisons with Kaka — a World Cup winner with Brazil in 2002 who also won the Golden Ball in 2007 after Milan’s Champions League triumph. He netted 29 goals for his country in 92 games.

Having netted 12 goals in his final season with Flamengo, he scored once in 44 games for the seven-time European Champion and felt unsettled.

“When I arrived (sporting director) Leonardo was there and so was (coach) Gennaro Gattuso, but five months later they were both gone,” Paqueta told broadcaster Canal Plus. “I felt a bit alone.”

Milan is now top of Serie A, and its fans have probably already forgotten Paqueta. But Lyon’s fans are counting on him leading the club to its first league title since Juninho’s last 14 years ago.

“It’s a difficult league but I know we have the ability to win,” he said. “I hope we can fight until the end.”

For the circumstances could not be better to topple defending champion Paris Saint-Germain, which is in second place but has lost four games already this season and recently fired its coach.

Mauricio Pochettino’s first game in charge after replacing Thomas Tuchel ended in a disappointing 1-1 draw at lowly Saint-Etienne on Wednesday. PSG is at home to mid-table Brest on Saturday, when star forward Neymar could return from an ankle injury.

While PSG is involved in the Champions League, Lyon failed to qualify for European competition and so Garcia can give full priority to a domestic push without worrying about rotating key players.

Unlike PSG, Garcia’s side has not been badly hit by injuries, either.

Also, Lyon still has to face PSG at home having won 1-0 away — a match in which Paqueta starred. 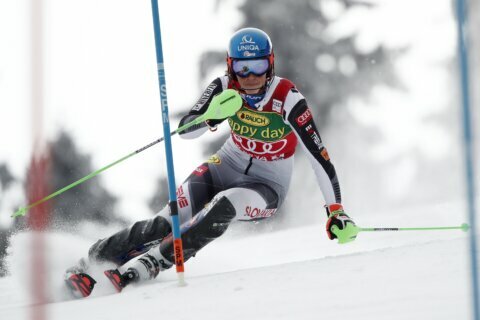