SAO PAULO (AP) — Brazil’s Palmeiras has advanced to the Copa Libertadores final despite losing 2-0 to Argentinian soccer power River Plate on Tuesday in the second leg of the semifinal.

Palmeiras advanced on aggregate because of its 3-0 win away over the Argentinians in the opening leg last week. The Brazilians won the tournament in 1999.

They will play their fifth decider of the South American tournament. Palmeiras’ opponent in the Jan. 30 final at the Maracana stadium in Rio de Janeiro will be local rivals Santos or Boca Juniors, who play Wednesday in the second leg after the first leg ended 0-0 in Buenos Aires.

River’s goals at the Allianz Parque stadium were scored by Robert Rojas in the 29th minute and Rafael Santos Borré in the 44th, both from headers. Rojas was sent off for a second yellow in the 73rd minute, but the Argentinians kept pressuring Palmeiras until the end of the match.

The tense clash in Sao Paulo was marked by several decisions by video review that upset the visiting side. The most decisive review disallowed River’s third goal, scored at the beginning of the second half following a short- range volley by Gonzalo Montiel.

Uruguayan referee Esteban Ostojich made the decision due to an offside long before the goal was scored, which appeared to confuse many of the players. 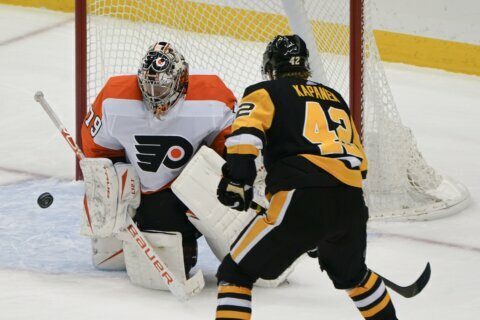