After DOJ warning, NCAA to delay vote on compensation rules

MIAMI (AP) — The NCAA is set to delay a potential landmark vote on legislation that would permit college athletes to be compensated for their fame for the first time after the association received a warning from the Department of Justice about potential antitrust violations.

NCAA President Mark Emmert on Saturday emailed a letter to Makan Delrahim, assistant attorney general of the DOJ’s antitrust division, saying he strongly recommended putting off votes on new name, image and likeness rules by two key legislative bodies that had been scheduled for next week.

The letter was obtained by The Associated Press. The New York Times was first to report on Emmert’s letter to the Department of Justice.

USA Today reported Friday that Delrahim had sent a letter to Emmert, expressing concerns about the NCAA’s NIL proposal and the restrictions it put on athletes’ ability to access the free market. A copy of that letter was obtained Saturday by the AP.

“Ultimately, the antitrust laws demand that college athletes, like everyone else in our free market economy, benefit appropriately from competition,” Delrahim wrote.

Under the NCAA’s proposal, schools could block athletes from entering sponsorship agreements that conflict with their schools’ deals. For example, a Nike school could prevent one of its athletes from striking a deal with another shoe or apparel company. Also, athletes would not be permitted to endorse products or companies such as alcohol or gambling that conflict with NCAA values.

Delrahim said the NCAA’s transfer rules could also be in conflict with antitrust laws. A proposal that would loosen restrictions on transferring athletes in high-profile sports such as football and basketball was expected to be passed next week, but now that vote also is being delayed.

“It’s extremely frustrating when we have so many people in the membership, so many presidents and (athletic directors) and faculty reps working on doing the right thing for students, especially around transfers and creating new opportunities, to have to now say we’ve got to pause until we sort this out,” Emmert told the AP.

“Gosh, it just seems like no good deed goes unpunished.”

There already was momentum building among some college sports leaders to delay the vote on the NIL proposal, especially after the Supreme Court in December agreed to hear an antitrust case involving the NCAA later this year.

Emmert told the AP on Saturday he had been in favor of membership moving forward with a vote, but the Department of Justice’s concerns made a delay necessary.

“I am profoundly confident that we will get this done. That this is a pause, not a stoppage or a cancellation,” Emmert said. “It’s a timeout, if you will.”

Ultimately, the decision to vote or table the proposals will be made by membership, but Emmert said he expects his recommendation to “carry the day.”

The NCAA Division I Council has been scheduled on Monday to consider proposed legislation that would allow athletes to strike financial deals with third parties to do things like to endorse or sponsor products, make personal appearances or be an online influencer. Schools would not be involved in the compensation.

If the Council passed the proposal, it would go to the D-I Board of Directors on Thursday for final approval.

Now, the next step in a process that began almost two years will be a meeting between Emmert and NCAA lawyers and DOJ officials.

“We believe, as courts have regularly held, that our current amateurism and other rules are indeed fully compliant,” Emmert wrote in his letter to Delrahim. “Whenever we consider revisions to the rules, however, we of course receive input from many interested parties, and we welcome your invitation to consult with the Department so that we can hear and fully understand its views as well.”

Emmert told the AP that when a meeting will happen is unknown, but he hopes soon.

The urgency for the NCAA to change its rules increased as state legislatures across the country last year followed the lead of California and worked to pass bills that would override the association’s rules banning college athletes from cashing in on their names, images and likenesses.

Six states have passed bills and Florida’s law is scheduled to go into effect in July.

College sports officials have argued it would be impossible to manage a national organization if different states have different rules. While working on its own solution, the NCAA has also turned to Congress for help in the form of federal legislation that will usurp state laws and provide protection from further legal challenges to its athlete compensation rules.

While both Republicans and Democrats in Washington have already put forth bills, the two sides have different ideas on the best way to proceed. The Republican bills are seen as more NCAA friendly, while the Democrats are looking to make more sweeping changes to college athletics.

No matter what NIL rules the NCAA comes up with, lawmakers likely will have the last word.

And the Supreme Court could ultimately send everyone back to the drawing board.

“I’m excited about getting in front of the Supreme Court,” Emmert said. “I think it’s an extraordinary opportunity for us to tell the story of college sports and why we believe having this be governed by the universities themselves through the NCAA is the right way to go. And we warrant the ability to do that.”

But for now, the potentially historic change to NCAA rules is heading for indefinite hold. 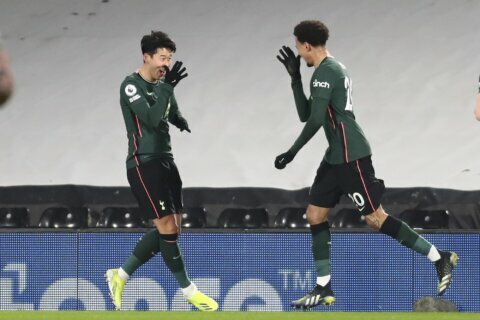