Liverpool heads to Southampton atop the Premier League in its title defense but now only due to having a better goal difference than Manchester United. In its last two matches, Liverpool has scored just once in draws against strugglers West Bromwich and Newcastle. The champions have drawn six matches and have scored no more than twice in each of the three victories they won by just a single goal. They hammered Crystal Palace (7-0), Wolves (4-0) and Leicester (3-0) but the pattern in the first half of the season has shown struggles in breaking down less-expansive opponents. Southampton enjoyed a strong start to the season but has now slipped to ninth. Southampton will be without goalkeeper Alex McCarthy after he tested positive for the coronavirus.

Valencia hosts Cádiz needing a victory after having fallen into the relegation zone of the Spanish league. So far it is a nightmare campaign for a Valencia team that is accustomed to fighting for European competition berths. It has struggled after not replacing striker Rodrigo Moreno, forward Ferran Torres and midfielder Dani Parejo following their exits in the summer. Coach Javi Gracia’s side has not won in its seven games since stunning Real Madrid 4-1 in early November. Valencia will be without suspended forward Gonçalo Guedes and injured defender Gabriel Paulista. Cádiz is in 12th place after going four rounds without a win since upsetting Barcelona 2-1 in early December. 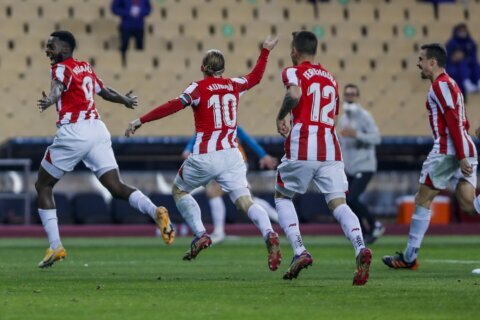