On a picture postcard minus-3 Celsius (27 Fahrenheit) day in the Swiss Alps, home favorite Gut-Behrami finished 0.93 seconds faster than Tamara Tippler. Federica Brignone, the defending overall World Cup champion, was 1.02 back in third.

Five of the top 20 highest-ranked starters skied out or were disqualified, including Sofia Goggia who won downhills on the Mont Lachaux slope the previous two days.

Gut-Behrami now has 14 of her 28 career World Cup wins in super-G, which demands speed, technical skills and an ability to improvise through unfamiliar gates. Unlike in downhill, racers do not train on the exact course-setting.

“In super-G when I feel great it makes everything easier,” said the winner, who is on track for a third career season-long title in the discipline. “It’s not so easy as it looks.”

Goggia, the 2019 world championship silver medalist in super-G, missed the second-last gate after nearly crashing out while landing the jump in sight of the finish line. She reacted to the error by putting her hands to her helmet in the finish area.

Elena Curtoni had been third behind her Italian teammate Saturday, but skied out by going wide after the last jump.

World Cup overall standings leader Petra Vlhova had the No. 1 bib that is often difficult in super-G before the course has revealed its traps.

Vlhova was too fast and direct cresting the hill’s signature jump mid-run and went wide of the next gate. No. 4 starter Wendy Holdener skied out the same way.

Gut-Behrami and other racers huddled around a television screen at the start watching how the early racers performed. No. 3 starter Stephanie Venier crashed out but did not seem injured.

“It was not really easy starting with the first numbers,” said Brignone, who wore No. 5. She now has four podium finishes but no race wins yet in defense of her overall title.

Wearing bib No. 9, Gut-Behrami had been runner-up in the Saturday downhill despite back and hip pains she said made it hard to walk.

“Today I’m stiff but I had no pain,” said Gut-Behrami, who rose to third in the overall standings she won in 2016. “I’m lucky I have my body back and I again have confidence in my skiing.”

Mikaela Shiffrin is the world champion in super-G but did not start Sunday. The American star is focusing on a giant slalom Tuesday at Kronplatz, Italy.

Another super-G is scheduled for next Sunday at Garmisch-Partenkirchen, Germany. It’s the last women’s race before the world championships start Feb. 8 at Cortina d’Ampezzo, Italy. 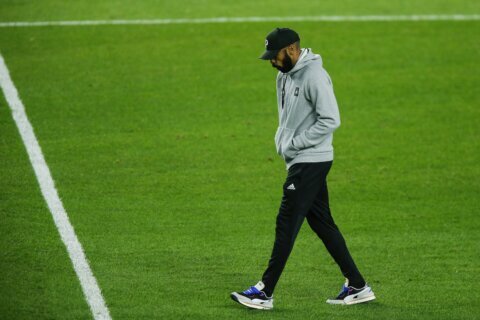