LLANELLI, Wales (AP) — Wales came from behind to beat a resilient Italy 38-18 in the Autumn Nations Cup fifth-place playoff on Saturday.

The Welsh ensured the year ended as it began, with a home win over the Italians. But the result was 42-0 in February, and brittle Welsh composure was exposed this time as Italy came back from 14-0 down to lead 18-17 until nearly an hour in.

Italy, however, ran out of puff again and Wales reeled off three of its five tries.

“We got a reasonable result,” Wales coach Wayne Pivac said.

“I was pleased the team found their composure. Mentally, they took their foot off. We had to readdress that.”

Italy’s ninth consecutive loss and eighth this year meant it has gone a calendar year without a win for the first time in the professional era.

Wales finishes with three wins out of 10 tests — two against Italy and the other Georgia — but Pivac said the Six Nations team he has nailed down will be better with consistent selection.

Wales bolted to 14-0 after maiden test tries for scrumhalf Kieran Hardy, set up by outstanding No. 8 Taulupe Faletau and flanker Justin Tipuric, and hooker Sam Parry.

But fullback Liam Williams limped off with a high ankle injury and was replaced by 19-year-old Ioan Lloyd for his second cap.

Then Italy mauled a lineout to the middle, spreading the Wales defense. Carlo Canna grubbered through the line and center partner Marco Zanon picked up and scored his first test try.

Moments later, Wales-born scrumhalf Stephen Varney, making his Italy debut, was away down the middle and Wales wing Josh Adams was sin-binned for a professional foul, Wales’ eighth penalty on the ground in the half.

Sheedy’s only penalty kick came after halftime but minutes later Italy grabbed the lead for the first time with a brilliant, sweeping team try finished by flanker Johan Meyer.

Adams returned from the bin and Wales was losing, but only for nine more minutes.

A Faletau half break had Gareth Davies in support and the scrumhalf cleared away with fresh legs only six minutes after going on.

George North, making a good fist of center, then scored his 41st try off ruck ball and 10th against Italy in 10 tests.

And, finally, a Sheedy pass released Faletau down the left touchline, and the No. 8 selflessly gave the try to Tipuric. 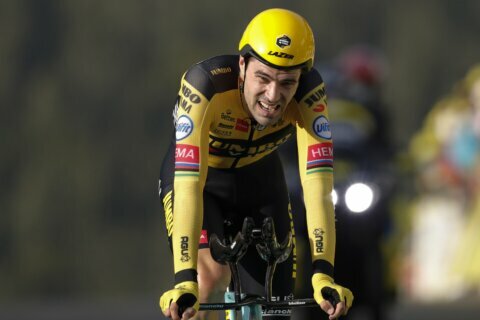