VAL D’ISERE, France (AP) — At age 32, Swiss skier Mauro Caviezel got the first win of his late-blooming career in a World Cup super-G on Saturday.

Caviezel topped a podium with two racers getting their first career top-3 finishes. He was 0.10 seconds faster than Adrian Smiseth Sejersted of Norway and 0.54 clear of Austrian Christian Walder.

Caviezel’s victory came at a special place in the French Alps. At Val d’Isère 19 years ago, his childhood idol Silvano Beltrametti was left paralyzed by a crash in downhill.

Beltrametti has since been a mentor for Caviezel, who comes from the same Graubünden region of Switzerland.

Caviezel won the opening super-G wearing the red bib noting he was the discipline standings champion last season. That title was earned with consistency — top-5 placings in all six races — without a signature win.

Super-G races typically have tricky passages for speed racers who do not ski on the course-setting until a brief inspection in the early morning.

Matthias Mayer, the Olympic champion in super-G, put his right hand to the snow to regain balance and placed 11th.

Alexis Pinturault was seventh and leads the early season World Cup standings. He was edged for the title by Kilde when last season ended early during the coronavirus pandemic.

Pinturault has a small 16-point lead over Marco Odermatt of Switzerland, who won a giant slalom in Italy on Monday.

Val d’Isère stages the first downhill of the season on Sunday. The weekend race schedule was flipped because better weather is expected Sunday. 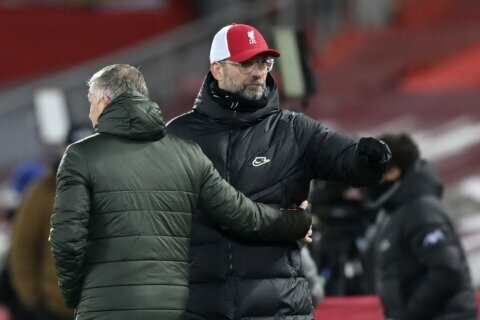