NAPLES, Fla. (AP) — Kevin Na and Sean O’Hair teamed to shoot a 16-under 56 in the scramble format Friday to take the first-round lead in the QBE Shootout.

Na and O’Hair had two eagles and 12 birdies on the Tiburon Golf Club’s Gold Course. O’Hair won the unofficial PGA Tour event in 2012 with Kenny Perry and 2017 with Steve Stricker.

“It felt pretty easy today just watching him putt and make everything he looked at,” O’Hair said. “Just kind of kept the momentum going. There was a couple putts that were crucial I think to do that.”

They eagled the par-5 sixth and 17th.

“My job was to just put it in play, and Sean hit a lot of bombs out there, was 30, 40 yards ahead of me,” Na said. “It was nice to hit a lot less club than I normally do. And he hit some great shots. His ball-striking was great. He made a good amount of putts. He was the one that always went first and I was able to see the line and I felt pretty good with the putter today.”

Ryan Palmer and Harold Varner III were second. They birdied 13 of the first 14 holes — only missing on the par-3 fifth — and added birdies on the final two holes.

“It’s a fun, good time out there,” Palmer said. “We both putt the ball well and we were able to shoot a low one.”

The all-rookie team of Lanto Griffin and Mackenzie Hughes matched Harris English and Matt Kuchar at 58.

Defending champions Rory Sabbatini and Kevin Tway were at 59 with Cameron Champ and Tony Finau.

Ryder Cup captain Stricker and Daniel Berger were tied for seventh at 60.

The 12 teams will play modified alternate shot in the second round and better ball Sunday.

“Tomorrow’s a tough format, the toughest format, but I think as long as we just keep it in play and make a few putts, we’ll be right there come Sunday,” O’Hair said. 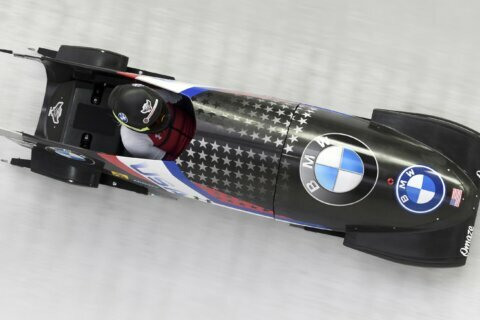