MADRID (AP) — After a difficult group stage, Real Madrid found its familiar swagger to easily avoid an early elimination from the Champions League.

Borussia Mönchengladbach, though, had to endure a few nervous minutes before being able to celebrate reaching the knockout stages for the first time in the Champions League era.

Karim Benzema scored two first-half goals as Madrid beat Mönchengladbach 2-0 on Wednesday to win Group B. But the German team held on to second place thanks to a 0-0 draw between Shakhtar Donetsk and Inter Milan in a match that finished several minutes later in Italy.

Gladbach players huddled by the bench after the match in the Spanish capital to watch the end of the game in Milan. A goal by either team would have kept the German club from advancing, but the players erupted in celebration when the final whistle was blown and their spot in the next round was secured.

“We were all nervous watching the other game on the iPad, but the joy was enormous when the final whistle went,” Gladbach captain Lars Stindl said. “This was our worst game of the group stages, but we’ve made it to the next round. We deserved to based on past performances.”

Gladbach players sang and jumped together for a few moments near midfield to celebrate at the empty Alfredo Di Stéfano Stadium in Madrid.

“I watched on after I got subbed off, but watching it as a whole team it was a wonderful moment,” Gladbach midfielder Christoph Kramer said. “Moments like that live long in the memory. It was absolutely incredible and the joy was uncontainable.”

Madrid needed a victory to guarantee advancement to the knockout round for the 24th straight season. The 13-time European winner struggled in the group — having conceded nine goals in its first five games — but finished with 10 points, two more than Gladbach.

Gladbach advanced to the last 16 for the first time in the Champions League era after finishing level on points with Shakhtar Donetsk but with a better head-to-head record.

Gladbach was making only its third appearance in the Champions League group stage. It was a European Cup finalist in 1977, losing the final to Liverpool.

Madrid looked in control from the start at the Di Stéfano. Benzema opened the scoring with a ninth-minute header after a cross by Lucas Vázquez, and added to the lead with a another header in the 32nd, this time after being set up by Rodrygo.

The victory was key for Madrid coach Zinedine Zidane, who had been under pressure following a series of poor results in the Champions League and the Spanish league. That pressure had already eased after a 1-0 win at Sevilla on Saturday, which ended the team’s three-match winless streak in the league.

“It was a good game to restore our confidence,” Benzema said. “We all leave stronger, the players and Zidane. This is the way to go forward.”

Luka Modric had a goal disallowed for offside in the 43rd and Vázquez hit the woodwork in the 79th. The visitors threatened only a few times on counterattacks.

Real Madrid hosts Atlético Madrid in a Spanish league derby on Saturday. Madrid is six points behind Atlético, which leads the league and has a game in hand. 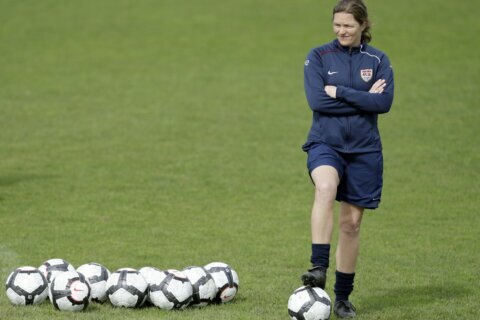