PARIS (AP) — Formula One driver Romain Grosjean expects he will need psychological help to deal with the traumatic memories of his horrific crash at the Bahrain Grand Prix.

The French driver’s car exploded into a fireball after crashing on the first lap and slicing through a metal barrier along the track on Sunday. Grosjean was trapped inside the Haas car’s flaming wreckage but escaped in scenes that drew awe and admiration around the world.

“There’s going to be some psychological work to be done, because I really saw death coming. When you see images, not even Hollywood is capable of doing that,” Grosjean told French broadcaster TF1 on Tuesday from his hospital bed in Bahrain. “To come out of the flames that day is something that will mark my life forever.”

Grosjean was estimated to be inside the raging furnace for nearly 30 seconds but was lucid enough to figure a way out of a near-death situation.

“I don’t know if the word miracle exists or it can be used, but it wasn’t my time. It did seem much longer than 28 seconds. I saw my visor turning all orange, the flames on the left side of the car,” he said. “I thought about a lot of things — notably about Niki Lauda — and I thought that it wasn’t possible to end up like that, not now. I couldn’t finish my story in Formula 1 like that.”

The late Lauda, a three-time F1 champion, survived but sustained horrific burns to his head after being caught inside his flaming car at the 1976 German GP at the Nuerburgring.

Somehow, Grosjean escaped with only minor burns to the back of his hands and even feels optimistic enough about competing in the season-ending Abu Dhabi GP on Dec. 13. His contract expires at the end of this season, and it remains uncertain if he will be given a seat in F1 next year, so that could effectively be his last race in F1.

“I’m very well, given the accident and the circumstances. My hand movements are fine, so that’s the main thing. It’s not very pleasant but it’s not painful, so I can’t complain,” Grosjean said. “There is a feeling of being happy to be alive, of seeing things differently. But also there is the need to get back in the car, if possible in Abu Dhabi.”

The 34-year-old Grosjean has three children — the eldest only 7 years old — and he revealed that the fear of them losing their father drove him through the flames.

“For the sake of my children, I told myself I had to get out. I put my hands in the fire and I could clearly feel my hands burning on the chassis,” Grosjean said. “My 5-year-old son Simon is sure I have magical powers and that I have a shield of magic love. He said that’s what protected me, that I managed to fly out of the car. Those are very strong words.”

Grosjean was also moved by the widespread support within F1 and beyond.

“An enormous amount of people showed me signs of affection and that’s something which touched me greatly,” Grosjean said. “Sometimes I have tears in my eyes.” 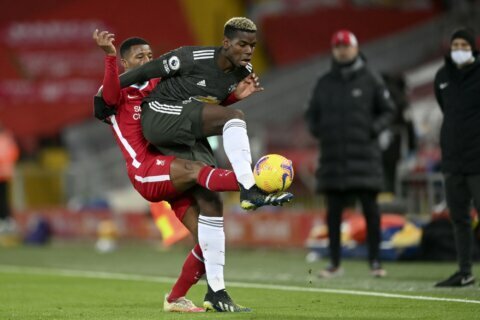