If Manchester City’s presence in the semifinals of the English League Cup is no real surprise, the same cannot be…
Listen now to WTOP News WTOP.com | Alexa | Google Home | WTOP App | 103.5 FM

If Manchester City’s presence in the semifinals of the English League Cup is no real surprise, the same cannot be said about second-division club Brentford.

By beating Newcastle 1-0 to take down a fourth Premier League opponent so far in the competition, Brentford reached the semis of a major cup competition for the first time in the southwest London club’s 131-year history.

City’s players, on the other hand, are regulars at the business end of domestic competitions and kept alive their bid to win the League Cup for a fourth straight season with a 4-1 win at Arsenal on Tuesday.

The holders were given a helping hand by Arsenal’s backup goalkeeper Rúnar Alex Rúnarsson, who — with the score at 1-1 at the start of the second half — fumbled a free-kick attempt by Riyad Mahrez and saw the ball squirm behind him into the net.

Further City goals from Phil Foden and Aymeric Laporte piled on the agony for Arsenal and its under-pressure manager Mikel Arteta, whose team has plunged to 15th place in the Premier League. It was Arsenal’s heaviest home loss in a domestic cup match in 22 years.

City is looking to win the League Cup for an eighth time, which would tie the record of Liverpool in the competition. Six of the titles have come in the previous eight seasons.

The other quarterfinal matches take place on Wednesday, when Everton hosts Manchester United and Tottenham is at second-tier Stoke.

Drawn against one of the two non-Premier League teams left in the competition, Newcastle squandered a great chance to advance to the semifinals of an FA Cup or League Cup for the first time since the 2004-05 season.

Especially with Brentford fielding a weakened lineup for the quarterfinal match owing to its busy upcoming schedule in the Championship, where the team is currently placed fourth. Among the six regulars dropped by the hosts was striker Ivan Toney, the top scorer in the second division with 16 goals, but they still dominated the match at the recently opened Brentford Community Stadium.

Josh Dasilva’s 66th-minute volley clinched victory for Brentford, which finally won at this stage of a cup competition at the fifth attempt.

“We want to be part of creating some totally new history for Brentford,” said manager Thomas Frank, whose team lost to Fulham in the Championship playoff final last season.

It’s back to a likely relegation scrap in the Premier League for Newcastle, whose manager Steve Bruce acknowledged it was a huge opportunity lost.

Rúnarsson was signed by Arsenal in September to be the team’s reserve goalkeeper, having finished last season as second choice for a Dijon team that finished in 16th place in the French league.

Facing City was his biggest test since moving — the Iceland international had previously only played in the Europa League for Arsenal — and it proved to be a chastening night at Emirates Stadium.

Barely two minutes had been played when Rúnarsson dived to punch clear a left-wing cross from Oleksandr Zinchenko, only for Gabriel Jesus to get in front of him and head the ball into an empty net.

Arsenal equalized against the run of play through Alexandre Lacazette. But after lively winger Gabriel Martinelli was forced off two minutes into the second half with an ankle injury, the hosts had another setback following Rúnarsson’s fumble.

“He hasn’t played a lot of games for us,” Arteta said of Rúnarsson. “He is just adapting to the league, and that’s it. We all make mistakes and we have to support him.”

Arteta defended his decision to give a rest to first-choice goalkeeper Bernd Leno, who played in the previous round at Liverpool and saved two penalties in a shootout.

“We have to give opportunities to other players,” Arteta said.

Foden might have been in an offside position when he was played through for the third goal, which saw him deftly chip Rúnarsson. VAR is not being used in the League Cup this season.

The midfielder then crossed for Laporte to head home to make it 4-1 in the 73rd minute.

“At the moment a lot of strange things are happening in every game,” Arteta said.

“We have to turn it around, there’s no other question. If we don’t, we are in big trouble.” 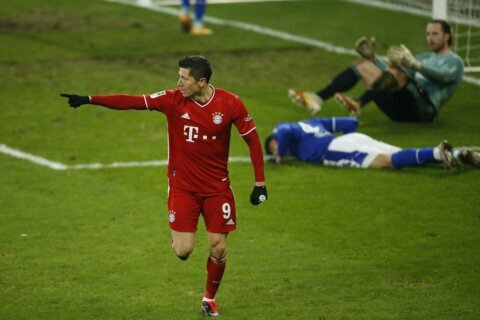