Barcelona held 1-1 at home by Eibar without Messi

BARCELONA, Spain (AP) — With Lionel Messi nursing his ankle in the stands, Barcelona fell further behind in the Spanish league on Tuesday after ceding its first-ever point to Eibar at Camp Nou.

Halftime substitute Ousmane Dembele salvaged Barcelona a 1-1 draw when he scored in the 67th. That canceled out Kike García’s opener 10 minutes earlier after a ball-control blunder by center back Ronald Araújo.

A second consecutive home draw meant Ronald Koeman’s side slipped into sixth place after Sevilla moved into fourth with a 2-0 win over Villarreal, which fell into fifth.

Front-runners Atlético Madrid and Real Madrid are seven points clear of Barcelona before they play matches on Wednesday.

“Being realistic, the league title is very complicated. Nothing is impossible, but we must recognize the gap,” Koeman said. “We were missing Leo, who is always decisive, but the sensation I have is ‘how is it possible we didn’t win?’ We created chances, missed a penalty, and gave away a goal that was their only shot on target.”

Messi was forced to watch the game tucked in a winter coat with the reserves because of an unspecified right-ankle problem. It is not reported to be serious.

Already without Ansu Fati and Gerard Pique because of serious injuries, Barcelona also lost midfielder Philippe Coutinho in the final minutes with what appeared to be a left knee injury.

Barcelona’s Martin Braithwaite had two chances to put the hosts ahead in the first half, but the Danish striker sent a penalty kick wide in the ninth minute and had a goal waived off for offsides in the 25th.

Otherwise, Eibar’s intense pressure kept Barcelona out of its area and helped give the visitors the lead.

García took advantage of some sloppy dribbling by Araújo to steal the ball well outside the area with only Marc-Andre ter Stegen to beat. García had the time and space to size up Barcelona’s goalkeeper and beat him with a low strike.

“We can’t make mistakes like the one I made,” Araújo said. “I take responsibility for it. But the only thing we can do is to keep working.”

Dembele went on at halftime for his first appearance since he missed five matches due to a thigh injury. He replaced Sergiño Dest and proved to be Barcelona’s top option in a lackluster attack without Messi.

Dembele drew a good save from Eibar goalie Marko Dmitrovic thanks to a pass from Pedro “Pedri” González before he pulled Barcelona level.

The French forward scored from a pass by Junior Firpo, who played well in a rare start ahead of Jordi Alba. Firpo made two quick passing combinations with teammates to break free down the flank before he sent a low ball to the far post where Dembele rifled it home.

Barcelona, however, did not seriously threaten Dmitrovic again.

It was the first point Eibar has taken at Camp Nou after losing its previous six visits.

“Of course they missed Messi. He is the best of all time. Most times we play against Barcelona they score three of four,” García said. “But we knew we would have our chances. We held on until halftime and then put the scare into them. Our pressure allowed us to take a point at Camp Nou.”

Lucas Ocampos converted a penalty and set up another goal to help Sevilla deal Villarreal its first loss in 13 rounds.

Ocampos scored his spot kick in the eighth after John Foyth handled a ball in the area. The Argentine forward then won possession and threaded a long ball forward to help Youssef En-Nesyri seal the result in the 53rd.

Betis got two goals from Sergio Canales in his first match since recovering from a muscle injury that sidelined him for seven games.

Valladolid drew 1-1 at Cádiz, which hasn’t won in four games since it stunned Barcelona earlier this month. 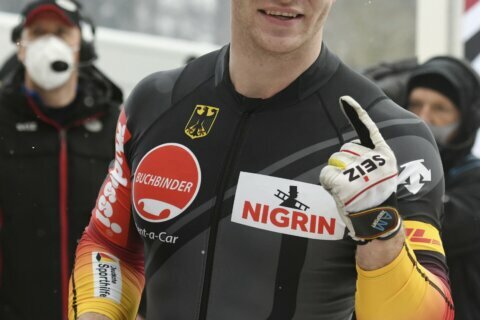