4 arrests made linked to soccer match-fixing in Moldova

THE HAGUE, Netherlands (AP) — Five of the 10 soccer teams in the Moldovan league have been involved in match-fixing…
Listen now to WTOP News WTOP.com | Alexa | Google Home | WTOP App | 103.5 FM

THE HAGUE, Netherlands (AP) — Five of the 10 soccer teams in the Moldovan league have been involved in match-fixing linked to organized crime this season and four arrests have been made, the Europol police agency said Tuesday.

A crime syndicate suspected of earning hundreds of thousands of dollars from bets on about 20 games has been dismantled in the operation, Europol said in a statement.

“Club executives, coaches, managers, football players and other intermediates are believed to be part of the network,” Europol said.

Four arrests were made Monday and the offices of a club were searched by anti-corruption investigators in Moldova. The people arrested and the club were not identified by Europol.

Wagers of up to 20,000 euros ($24,000) are suspected of being placed mostly on Asian betting markets for each fixed match.

“Overall, the criminal profits are estimated at 600 000 euros ($728,000),” the Netherlands-based Europol said. “Links to EU member states have been also detected. The investigation is ongoing.”

Europol said it “provided operational support by deploying two experts to Moldova to crosscheck operational information against Europol’s databases and provide links to investigators in the field.”

Moldova is a former Soviet republic that borders Romania and Ukraine. It declared independence in 1991 and is among the poorest countries in Europe.

The league’s most established team, Sheriff Tiraspol, leads the standings after winning 18 of its 20 games since July.

Last-place Codru has lost 17 of its 21 games and has a minus-55 goal difference. 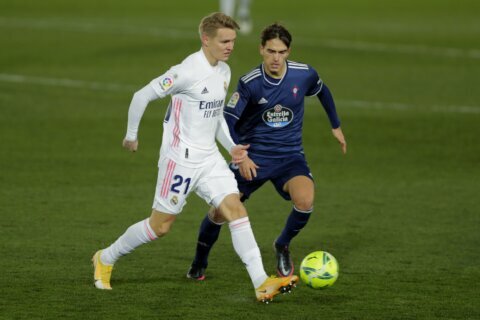