KRASNODAR, Russia (AP) — Munir El Haddadi scored in the final minute of stoppage time as Sevilla defeated Krasnodar 2-1 to reach the knockout round of the Champions League on Tuesday.

El Haddadi scored the late winner with a shot from inside the area to give Sevilla 10 points in Group E. Chelsea also advanced with 10 points after winning 2-1 at Rennes. Krasnodar and Rennes stayed at one point each after four matches.

Ivan Rakitic put Sevilla ahead four minutes into the match with a shot from outside the area after the ball was cleared from the box by Krasnodar defender Kaio. The hosts equalized with Wanderson’s strike from close range, with Sevilla defender Jules Koundé unable to block it at the goal line.

Krasnodar had struggled to create significant chances and its first shot on target came late in the first half. It had one of its best chances shortly after the break when Rémy Cabella’s shot at the open net hit the post after being redirected by Koundé as he slid in front of the goal.

Sevilla had won only one of its last 11 away matches in the group stage of the Champions League. The defending Europa League winner is making its first Champions League appearance since the 2017-18 season, when it was eliminated by Bayern Munich in the quarterfinals. Sevilla has reached the round of 16 in its last three appearances.

“I’m happy with the team’s performance and with the fact that we managed to qualify for the knockout stage after just four matches,” Sevilla coach Julen Lopetegui said. “That’s especially valuable in this difficult season.”

It was in Krasnodar that Lopetegui was fired as coach of Spain’s national team before the 2018 World Cup for taking a job with Real Madrid without telling the Spanish soccer federation.

“We can only blame ourselves for this result,” Krasnodar coach Murad Musaev said. “We were good but only in some parts of the game. And of course we should’ve played until the end of the match. It was unacceptable to concede a goal like that in the final minutes.”

Sevilla had rallied from two goals down to win 3-2 in its match against Krasnodar in Seville despite playing the entire second half with 10 men because of a red card to Jesús Navas.

Navas was one of the several Sevilla players not available Tuesday because of injuries and the coronavirus. Carlos Fernández and goalkeeper Bono had tested positive for COVID-19, as did Krasnodar goalkeeper Matvei Safonov.

Sevilla also lost Sergio Escudero because of a injury in the 60th. The Spanish defender left the field on a stretcher.

Sevilla had won only one of its last six matches before beating Krasnodar at home. Since then, it earned consecutive Spanish league victories over Osasuna and Celta Vigo.

“We deserved the win, which is very important because it takes us to the next round,” Rakitic said. 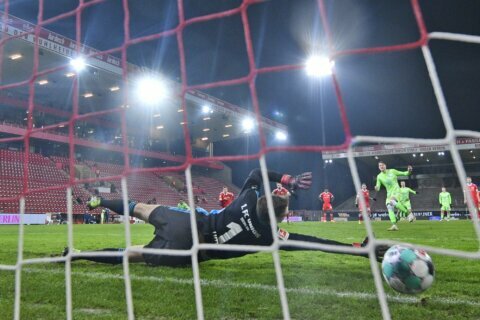