DORTMUND, Germany (AP) — Borussia Dortmund forward Youssoufa Moukoko could become the youngest player ever in the Champions League on Tuesday.

Dortmund said Monday that Moukoko was added to the squad for the home match against Belgian club Brugge.

Moukoko broke the Bundesliga record on Saturday when he made his debut for Dortmund on the day after his 16th birthday. Moukoko came off the bench in the 5-2 victory over Hertha Berlin.

If he plays on Tuesday, Moukoko would break the Champions League record held by Celestine Babayaro. The Nigerian left back was 16 years, 87 days old when he played for Belgian club Anderlecht in the group stage in 1994.

Dortmund coach Lucien Favre said he was eager to rotate the team to cope with a busy schedule but didn’t commit to giving Moukoko any game time.

“It’s hard to say and to answer immediately. We will see today in training and we have a lot (of players) up front,” Favre said. “We have a lot of options up front and we will see.”

Moukoko scored 13 goals in four games for Dortmund’s under-19 team this season and 34 in 20 games last season. He has been training regularly with the first team since August.

Moukoko was born in Cameroon but moved to Germany as a child and has played for German youth national teams.

Dortmund is in first place in Group F of the Champions League and will be on the verge of qualifying for the knockout stages with a win over Brugge. Dortmund beat the Belgian team 3-0 earlier this month. 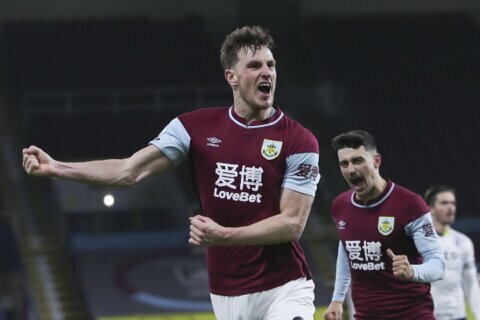