MADRID (AP) — Athletic Bilbao comfortably defeated Real Betis 4-0 to move further away from the relegation zone in the Spanish league on Monday.

Athletic got on the board with an own goal by Victor Ruiz in the ninth minute, and Ander Capa added to the lead before halftime. Iker Muniain scored in the 59th and Álex Berenguer sealed the scoring in the 68th.

Betis goalkeeper Claudio Bravo had to make a few good saves to keep the hosts from an even bigger win at San Mamés Stadium in Bilbao.

The result moved Athletic to eighth place. It was just two points above the relegation zone entering the match.

Manuel Pellegrini’s Betis also is in mid-table, though it has played one game more than Athletic.

Real Sociedad leads the league with 23 points, three more than second-placed Atlético Madrid, which has two games in hand.

Cyclocross worlds to go ahead as planned despite virus 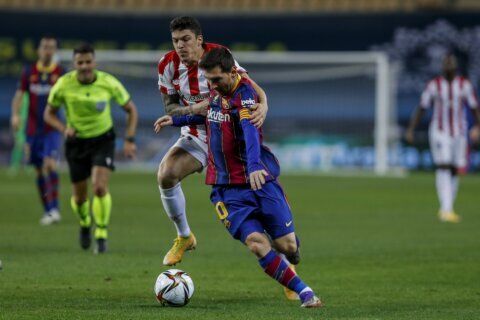 Messi back in Barcelona squad for Copa del Rey match