Alario scored two goals for the third consecutive league game, taking his tally to seven in his last four. Leverkusen twice came from behind to preserve its unbeaten start and stay fourth.

Gladbach forward Lars Stindl opened the scoring in the 18th minute with a penalty awarded after Lukas Hradecky brought down Breel Embolo. The Leverkusen goalkeeper was booked for the challenge.

Alario equalized on a counterattack in the 27th with a brilliant curling finish inside the far top corner.

Stindl scored again in the 30th, when his goal was initially ruled offside. A VAR check showed that Leverkusen’s Florian Wirtz was last to touch the ball before Stindl turned to shoot inside the far post.

Ramy Bensebaini struck the underside of the crossbar minutes later for Gladbach, before Alario equalized for a second time with a header off Wirtz’s cross in the 41st.

Gladbach should have scored in the 67th when Hradecky denied Stindl on the line and Hannes Wolf blazed over with the goal at his mercy from the rebound.

The visitors were to rue the miss straight away when Leon Bailey scored a minute later, playing the ball through Yann Sommer’s legs from a difficult angle, and Nadiem Amiri set up Julian Baumgartlinger to decide the result in the 82nd.

Valentino Lazaro saved the best for last when he scored with the back of his heel on a volley for Gladbach’s consolation in injury time.

First-half goals from Renato Steffen and Wout Weghorst put unbeaten Wolfsburg on course for just its second win in seven games, but Sargis Adamyan pulled one back in the 87th minute and Maximilian Arnold conceded a penalty for handball in injury time.

Casteels guessed the right way, however, to save Munas Dabbur’s effort from the spot.

League leader Bayern Munich beat Borussia Dortmund 3-2 away on Saturday to open a two-point lead over Leipzig after seven games. 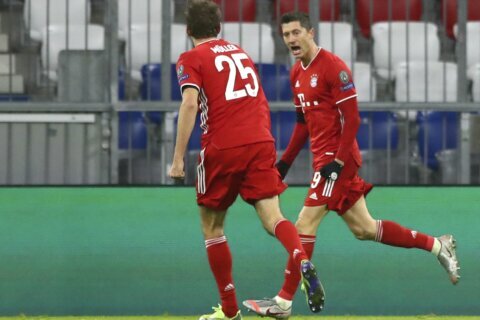