BERGAMO, Italy (AP) — Duván Zapata scored a quick-fire double to help Atalanta rally to a 2-2 draw at home to Ajax in the Champions League on Tuesday.

Dušan Tadić had converted a penalty and Lassina Traoré was again on target to give Ajax a 2-0 halftime lead before Atalanta fought back after the break with two goals in six minutes.

“We didn’t change our way of playing in the second half, it was just in the first half we didn’t manage to finish off our chances,” Zapata said. “We knew we were having a great game and we told ourselves we just needed a bit of luck, it’s a shame we didn’t manage to score the third.

“I’ve scored better doubles but today was the one that counted the most.”

Atalanta slipped to second in Group D, two points behind Liverpool after the Premier League champion beat Midtjylland 2-0. Ajax is a further three points further back.

Atalanta was a surprise quarterfinalist last season, in its first-ever season in the Champions League, and it beat Midtjylland 4-0 last week.

The hosts were playing their first Champions League match in Bergamo. Atalanta had played at San Siro in Milan last season while its Gewiss Stadium was being renovated. No fans were allowed in Tuesday after new restrictions were introduced in Italy this week because of the coronavirus pandemic.

Atalanta had lost its last two Serie A matches while Ajax had made headlines on Saturday with a record 13-0 win in the Dutch league, with Traoré scoring five.

Atalanta gifted Ajax the opener on the half-hour as Robin Gosens attempted a clearance and instead caught Traoré in the chest. Tadić fired the resulting penalty into the bottom right corner.

The hosts were also at fault for the second, eight minutes later, as goalkeeper Marco Sportiello could only fumble at a cross and Traoré tapped it in from close range.

Atalanta pulled one back nine minutes after the break when a shot was deflected into the path of Alejandro “Papu” Gómez and he crossed back in for Zapata to head in at the back post.

Zapata doubled his tally six minutes later, running onto a good ball by Mario Pašalić and blasting it past Ajax goalkeeper André Onana. 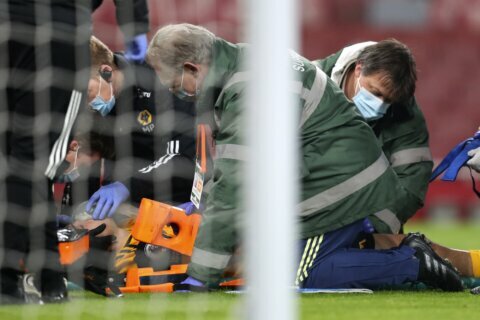