PARIS (AP) — The draw in December for the 2023 Rugby World Cup pools in France will be based on the world rankings last Jan. 1.

The pools for the 20-team field were originally to be drawn following the traditional autumn tours of Europe in November, but the coronavirus pandemic tore apart those plans. The leading teams will try and complete the Six Nations this month, and play the delayed Rugby Championship in November.

But because there haven’t been any internationals since mid-March, World Rugby decided on Friday to seed the pools based on the rankings at the end of last year.

“This represents the fairest scenario given it was the last time that all teams were able to play,” the governing body said in a statement.

The rest of the bands are the other eight teams who automatically qualified by finishing in the top three in their pools at the 2019 World Cup in Japan, and eight qualifiers.

The draw in Paris on Dec. 14 is being done three years before the tournament in order for French organizers to optimize ticket sales before tickets for the 2024 Olympic Games in Paris go on sale. Tickets for the 2023 Rugby World Cup will be available from early 2021.

World Rugby has already decided the next draws will be done in the year before the World Cup to ensure the pools better reflect performance at the time. 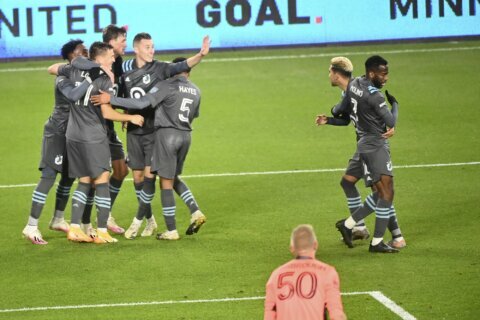