LEEDS, England (AP) — Pep Guardiola was frustrated by the strength of guru Marcelo Bielsa’s Premier League newcomers as Manchester City was held 1-1 by Leeds on Saturday.

At a rainy, empty Elland Road — due to coronavirus restrictions — Rodrigo came off the bench in the second half to equalize with his first goal since joining Leeds ahead of the season in a club-record transfer.

The Spaniard pounced on a mistake by City goalkeeper Ederson to turn the ball home from close range in the 59th minute.

It canceled out the 16th-minute goal from Raheem Sterling, who cut inside on the left edge of the penalty area and drove a low shot inside the far post.

City, the 2018 and 2019 champion, is eight points behind leader Everton in 11th place, albeit with a game in hand.

“They destroyed the Championship last season,” Guardiola said, “and have done so good so far, but in the last 10 minutes we were there, trying to win.”

Leeds is in fifth place on its return to the top division after 16 years.

“We had to find an immense physical effort to be able to be on even terms, or slightly better than City for half a game,” Bielsa said. “And we had to survive the beginning of the first half and the end of the second half.”

Guardiola handed a debut to Ruben Dias and the defender, who cost 68 million euros ($78 million) from Benfica, responded with an accomplished display.

“He had one training session and this Leeds team is one of the best to start away for difficulty, but he was outstanding,” Guardiola said. “He gave us the sense of maturity and leading the line and knowing exactly what he had to do. We are happy with his performance.” 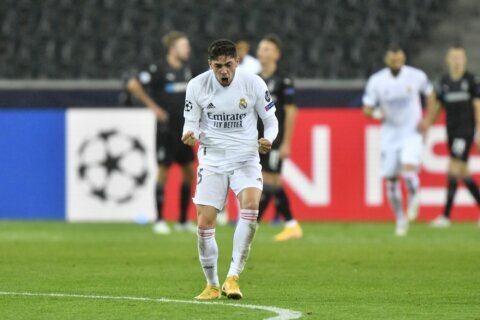