BERLIN (AP) — Leipzig was still celebrating its swift ascent from the lower divisions of German soccer when Manchester United handed the club its biggest loss in its 11-year history.

Leipzig, which was founded only in 2009 and currently is in first place in the Bundesliga, was looking forward to its Champions League game at Old Trafford when it pointed out that it was facing little-known Meuselwitz in the fourth division nine years earlier.

Back to the present, and Marcus Rashford came off the bench to score an 18-minute hat trick in United’s 5-0 rout on Wednesday.

“The Bundesliga is a different competition,” said Leipzig coach Julian Nagelsmann, whose team is one point ahead second-place Bayern Munich and Borussia Dortmund after five matches.

But it could be another difficult autumn for Leipzig, which was also leading at the same stage last year. The team then went four games without a win — including two losses — and dropped to sixth place.

Nagelsmann is determined to avoid a repeat before his team visits Borussia Mönchengladbach on Saturday, which has become a high-stakes clash between two sides bidding to get over Champions League disappointment.

Gladbach was minutes away from recording a memorable win over Real Madrid on Tuesday before conceding two late goals in a 2-2 draw.

“We should have closed the deal,” Gladbach coach Marco Rose said.

Gladbach has not yet settled in the Bundesliga either, losing to Borussia Dortmund and drawing with Union Berlin before unimpressive performances against Cologne, Wolfsburg and Mainz.

After playing Gladbach, Leipzig faces another tough match at home against Paris Saint-Germain on Wednesday, with games against Freiburg and Eintracht Frankfurt to come in the Bundesliga before the return trip to Paris in the Champions League.

Lukas Klostermann and Konrad Laimer remain injured, while Amadou Haidara is still out despite finishing his two-week quarantine period for the coronavirus he picked up while with Mali’s national team.

Nordi Mukiele and Tyler Adams are also likely out with a thigh injury and knee problem, respectively.

“I have a bit of hope for Tyler (though) he still has problems,” Nagelsmann said. “With Nordi, I have very little hope that he’ll make it for the weekend.”

Both Bayern and Dortmund will be waiting to take advantage of any slipups. Bayern visits Cologne, while Dortmund travels to promoted Arminia Bielefeld on Saturday. 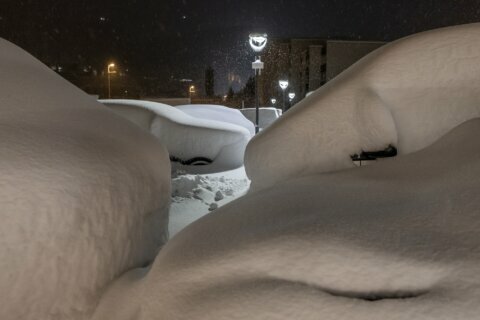