PIRAEUS, Greece (AP) — Ahmed Hassan came off the bench to score an injury-time goal for Olympiakos in a 1-0 win over Marseille in the Champions League on Wednesday.

The Greek champions held the initiative for most of the match at Giorgos Karaiskakis stadium and had a goal disallowed by video review after Giorgos Masouras had found the net in the 52nd minute.

“This is a special night for me. It’s my first game in the Champions League and I scored a goal,” Hassan said. “It is five years ago to the day that I lost my father so I dedicate this game to him. I am very happy but am also filled with emotion.” Marseille, returning to Europe’s top club competition after a six-year gap, had looked happy to settle for a point in the Group C match. The visitors’ best chance came from Dario Benedetto moments after the restart. His effort was stopped at close range with some quick reflexes from goalkeeper Jose Sa. “We weren’t aggressive enough. I think that was key for us,” Marseille defender Jordan Amavi said. “We woke up in the game too late. We did have chances. But in the end, we didn’t do enough to create anything concrete.” Olympiakos normally relies heavily on its boisterous home support but the country’s prime minister intervened this week to cancel plans to allow a limited number of fans back into soccer stadiums following a record spike in COVID-19 infections. Taking a risk-averse approach to its opening game, Olympiakos fielded Youssef El-Arabi as the lone striker. The Moroccan missed a string of first-half chances but paired well with the newly returned left-back Jose Holebas who carried the ball forward. Manchester City won the other Group C match against Porto, with a 3-1 victory at home. ___ 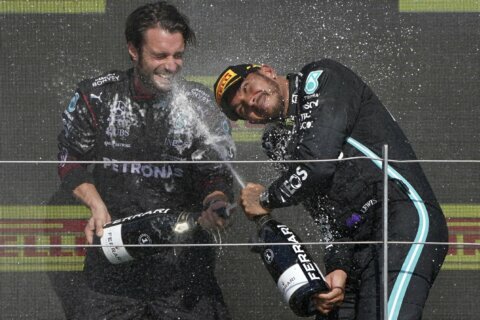