Gaudu sped away from Marc Soler and screamed with joy as he crossed the finish line at the top of Alto de la Farrapona. The Groupama-FDJ rider won the 170-kilometer (105-mile) ride up four category-one climbs in Spain’s northern mountains in just under 5 hours.

Gaudu and Soler were the last remnants of a breakaway that successfully stayed ahead of the group of overall contenders on the final climb.

Defending champion Roglic maintained the red leader’s jersey that he reclaimed from Carapaz on Friday. Roglic and Carapaz crossed together to remain on the same overall time.

Dan Martin is third overall at 25 seconds behind.

“It was a hard day in the mountains,” Roglic said. “For now, everything under control. I have a really strong team. So far we are managing this really good.”

A group of riders held a short protest at the start of the stage to voice complaints about the race officials’ decision the previous day that a gap had opened between Roglic, the winner of Stage 10, and Carapaz. The decision awarded Roglic a three-second advantage over Carapaz in the stage, allowing him to take the lead.

The disgruntled riders were angry that officials had not considered the race finale as a bunch sprint as originally planned, which would have eliminated any time difference as part of a safety measure to prevent accidents. Officials said that since it was a ramp finish, and there was no bunch sprint, the safety rule was not relevant.

Sunday’s stage stays in the mountains with a 109.4-kilometer (67.9-mile) ride over four summits before a beyond-category finish atop the Alto de l’Angliru.

The coronavirus pandemic caused the grand tour to be pushed back from its August-September slot and reduced from 21 to 18 stages. 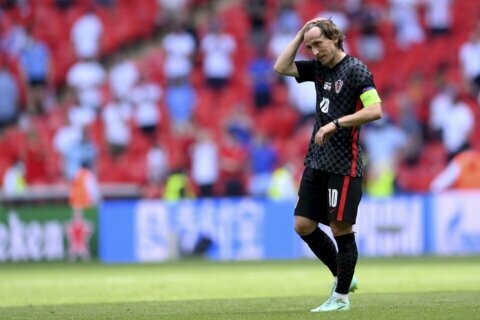