WARSAW, Poland (AP) — Having a sports psychologist helped Polish teenager Iga Swiatek win the French Open, and she thinks it can help others, too.

The 19-year-old Swiatek said Wednesday she drew a lot of support and strength from her work with sports psychologist Daria Abramowicz, who was with her during the two weeks of the Paris tournament.

“She understands me and she is a sports psychologist, so both on court and off court she is doing, with me, a great job,” Swiatek told The Associated Press.

“The mental side of tennis is really important,” Swiatek said in English.

It played an important role in her victory. Upon returning after the coronavirus stoppage, she put pressure on herself to win.

“I realized that it doesn’t have a good impact on my tennis and I’m not able to play as good tennis on match(day) as on practice (days), so we tried to change that and we did a great job and I’m really happy that the result of that job is (a) Grand Slam,” Swiatek said.

Swiatek became the first Polish tennis player to win the title at Roland Garros on Saturday, and since then “life changed completely.”

“I have to get used to this series of new things for me, and I think I’m going to need (a) few more weeks to reflect on it, on (the) whole tournament,” she said.

The success has whetted her appetite for more titles.

“My dream, my long-term goal is to win every Grand Slam and also a medal in Olympic Games, so this is going to be very tough for me,” Swiatek told the AP.

The past two weeks “showed that anything is possible” and that “I can actually achieve that and I’m going to do everything to do that.”

At the French Open, Swiatek also reached the semifinals in the women’s doubles tournament.

As a fan of men’s singles champion Rafael Nadal, and speaking at a news conference about possibly playing in mixed doubles tournaments, she said she hoped the Spaniard would “see the potential of this relation.”

Their paths already crossed in Paris this year.

“On the first day of the tournament I was warming up playing football with a Slovenian friend and Rafa’s bodyguard told us to stop, but seeing this he (Nadal) just waved his hand to show we should continue playing and I appreciate that very much,” Swiatek told the news conference.

“I just love Rafa’s style of game and I appreciate his dedication and the way he behaves as a sportsman, and I just really respect him,” Swiatek later told the AP.

At the French Open, Swiatek lost only 28 games in seven matches and became the first woman to win the title in Paris without dropping a set since Justine Henin in 2007. She is also the first teenager to win the women’s title at Roland Garros since Iva Majoli in 1997. 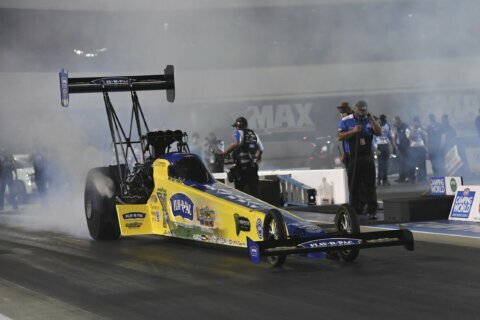