PARIS (AP) — France dazzled in defeating Ireland 35-27 with a bonus point on Saturday but it wasn’t enough to prevent England from winning the Six Nations on Saturday.

England’s earlier 34-5 bonus-point win in Italy cranked up the pressure on trophy rivals France and Ireland, and neither could answer.

Ireland would have grabbed the title with a victory by six points, while France needed to win by an unlikely 31 points with a bonus point.

Neither scenario happened, and Eddie Jones’ England celebrated from afar after last winning in 2017.

“The team did what they had to do,” France coach Fabien Galthie said. “It was a challenge to take first place but we’re happy to be second.”

That’s really because since France reached and narrowly lost the 2011 Rugby World Cup final to host New Zealand, the team had been at the wrong end of the table fighting against the wooden spoon in a near-decade of drudgery.

“Two years ago we could never have dreamed of being in this position,” back-rower Gregory Alldritt said. Last year, France was fourth with only two wins.

But France, rejuvenated under a new coach, beat England and finished the campaign tied with England on points, losing out on points difference.

The pity was no fans were allowed at Stade de France to witness an exciting game with some old French flair among their five tries.

Scrumhalf Antoine Dupont, flyhalf Romain Ntamack and center Virimi Vakatawa stood out as the backline caused problems all night, with a deserved penalty try added to the mix.

France’s opening try came out of nothing.

Fullback Anthony Bouthier shrugged off Ireland captain Jonathan Sexton, and wing Gael Fickou had to stop to pick up a dropped pass inside his half. He stood up prop Andrew Porter, slipped another defender, drew the last one and fed Dupont inside for a converted try.

Moments later, Bouthier was sin-binned for a deliberately knocking the ball out as Ireland winger Hugo Keenan overran a bouncing ball in the left corner.

Ireland used the man advantage to patiently work prop Cian Healy over in his 100th test. Ireland led 10-7 but not for long.

Vakatawa’s flick on, Vincent Rattez’s grubber and Ireland fullback Jacob Stockdale’s fumble saw flanker François Cros kick ahead and definitely score if he hadn’t been dragged down by opposite Caelan Doris, who was sin-binned. France received the penalty try.

France held on to lead 17-13 into halftime, and scored first again when Dupont collected Fickou’s clever kick and offloaded superbly to give Ntamack a try.

Ntamack landed two penalties for 28-13 and inch France closer to contention for the title on points differential.

They finished in more style, though, when Ntamack chipped and gathered and set up Vakatawa between the posts.

In injury time, Stockdale gave Ireland the last converted try but it didn’t ease the pain of the title being ripped from their grasp by the fabulous French. 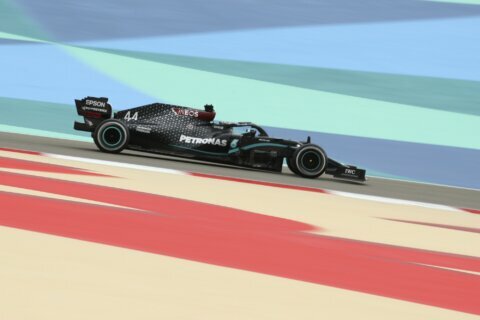