STUTTGART, Germany (AP) — Sebastian Andersson rescued a 1-1 draw for Cologne after his side’s calamitous start against Stuttgart in the Bundesliga on Friday.

Stuttgart’s Orel Mangala scored before any visiting player had even touched the ball. Gonzalo Castro surged forward and the ball worked its way through Daniel Didavi and Sasa Kalajdzic, who laid the ball back for Mangala to hammer it to the roof of the net after just 24 seconds played. Didavi then struck the crossbar in the third minute.

A penalty conceded by Atakan Karazor provided the visitors a lifeline in the 23rd minute. Andersson dusted himself off to equalize from the spot.

Tanguy Coulibaly should have restored Stuttgart’s lead before the break but Timo Horn got his hand to the ball to palm the French midfielder’s effort away.

The second half failed to match the excitement levels of the first.

Stuttgart substitute Darko Churlinov struck the post in the closest either side came to scoring, but it wouldn’t have counted as he’d strayed offside.

It earned Cologne its second successive point after starting with three defeats, while Stuttgart climbed to fourth ahead of the rest of the fifth round. 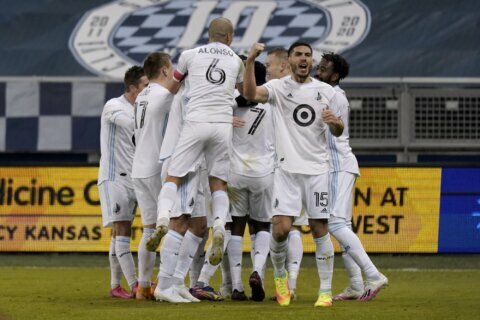