BRADENTON, Fla. (AP) — DeWanna Bonner scored 26 points and Alyssa Thomas and Brionna Jones added 20 each in the Connecticut Sun’s 96-77 victory over the Indiana Fever on Saturday.

The three combined to shoot 25 of 42 to help the Sun (9-10) strengthen their hold on the seventh of eight WNBA playoff berths with three games remaining.

Alyssa Thomas and Jasmine Thomas, who had seven assists, were back in the starting lineup after missing a loss to Las Vegas on Thursday because of injuries.

The Liberty (2-16) were eliminated from playoff contention, the first team to drop out.

Joyner Holmes had 13 points and 13 rebounds for the Liberty. They have lost four straight.

A’ja Wilson scored 13 of her 21 points in the second half and Jackie Young sparked a fourth-quarter run to help Las Vegas beat Atlanta.

Young finished with 18 points. Angel McCoughtry and Kaylah McBride also had 18, and Dearica Hamby added 11 points and nine rebounds. The the Aces (14-4) are a game back of first-place Seattle. 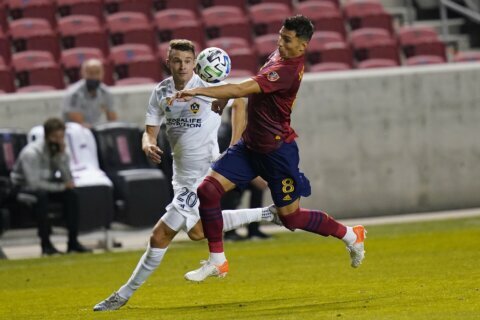