MADRID (AP) — Luis Suárez quickly made an impact at Atlético Madrid. Former teammate Lionel Messi was his usual impressive self for Barcelona.

Suárez, who had his debut Sunday with Atlético after being told he was not wanted by Barcelona, scored twice and had an assist in the nearly 20 minutes he played in Atlético’s 6-1 rout of Granada in the Spanish league.

Messi, who was forced to stay at Barcelona after telling the club he wanted to leave, scored once and helped his team beat Villarreal 4-0 in its league opener under new coach Ronald Koeman.

It was Messi’s first official game with Barcelona since the club denied his request to leave in the offseason. He was outspoken against the club but had promised to give his best in what could be his final season at Barcelona.

Messi celebrated as usual after scoring from the penalty spot in the 35th minute at the Camp Nou Stadium. He later also played a role in the own-goal by Pau Torres before halftime, as the Villarreal defender tried to intercept a cross by the Argentina great.

Messi missed a few other chances to score in the comfortable opening win for Koeman. The 17-year-old Ansu Fati, one of the players helping to make up for Suárez’s absence in attack, put Barcelona on its way to victory with goals in the 15th and 19th minutes.

Koeman replaced Quique Setién after the team’s embarrassing 8-2 defeat to Bayern Munich in the quarterfinals of the Champions League in August, a result that capped the club’s first season without a title since 2007-08. The former Netherlands coach arrived with the task of revamping the first team squad and immediately told Suárez he was not needed anymore. The Uruguay striker left as Barcelona’s third all-time highest scorer with 198 goals.

“Sometimes change is important for a player,” Suárez said Sunday. “I’ve been incredibly welcomed at this club. I’ve had a good impression from the start and that shows on the field.”

Suárez quickly showed he will be a good fit in Diego Simeone’s team — and that Barcelona may end up regretting its decision to let him go.

Four days after arriving, Suárez came off the bench in the 71st and scored with a header in the 85th and with a left-foot shot in stoppage time. He also set up Marcos Llorente’s goal with his first touch after entering the match. Diego Costa, Ángel Correa and João Félix also scored for Atlético.

Félix, the young Portuguese forward carrying high expectations in his second season with Atlético, had thrived before Suárez came in, creating good chances for his teammates from the start. He set up the team’s second goal by Correa in the 47th, and scored the third in the 65th with a shot from inside the area. Costa, who had opened the scoring in the ninth, set up Félix’s goal. Saúl Níguez missed an early penalty kick for Atlético.

“Suárez’s arrival creates competition in the group and that is good,” Atlético coach Simeone said. “The arrival of an important player like him improves the squad, but the team was already doing well before he arrived.”

Suárez had come close to scoring with a low shot that went wide in the 76th, and he also had been denied an opportunity from the spot after video review reversed a penalty call for a foul on him. He was ready to take the penalty when the call was reversed.

Atlético won’t pay more than 6 million euros ($7 million) in variables for the 33-year-old Suárez, a longtime friend and teammate of Messi, who was among those who publicly criticized the way Barcelona let the striker go.

“I wish him the best of luck,” Koeman said of Suárez. “We have to think about our own team now … It would be good to have another No. 9 as a reference, but we can also play without one.”

Both Atlético and Barcelona had their first two league matches postponed because they played late into last season in the Champions League.

Playing three days after losing the UEFA Super Cup to Bayern Munich, Sevilla rebounded with a 3-1 win at promoted Cádiz.

Sevilla also had its first two games postponed after winning the Europa League in August.

Athletic Bilbao won 2-1 at Eibar with a pair of goals by Unai López, while Levante came from behind to beat host Osasuna 3-1. Valladolid, still winless, drew 1-1 with visiting Celta Vigo. 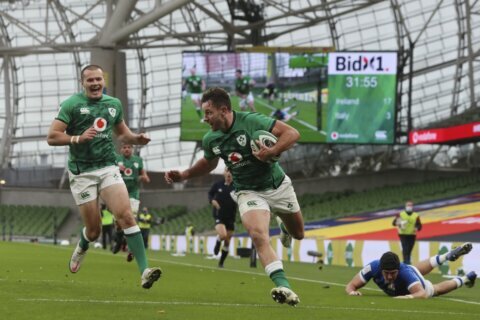