Nicknamed “Mondo,” Duplantis already holds the indoor world record of 6.18 meters (20 feet, 3 1/4 inches) set in Glasgow in February — but Bubka’s classic outdoor mark was viewed by many as the ultimate test.

“World record — finally! It is so cool,” Duplantis said. “I wanted to get over these 6.15 so badly. Everybody kept talking about it, it was a big chip on my shoulder … When I did it, it was more relief than joy.”

The 20-year-old Duplantis, who was born and raised in the United States, came agonizingly close on his first attempt before clearing the bar on his second.

“It is crazy,” Duplantis said. “It has been a long time coming. Coming into the season we did not know if we were able to do any competition at all. This world record is really unexpected and I am very grateful.”

Duplantis was a child prodigy who broke age-group records on his way to joining the pole vaulting elite. He chose to compete internationally for Sweden, his mother’s home country. He won the silver medal at last year’s world championships.

Warholm ran a meet record 47.07 seconds, less than three-tenths of a second off Young’s record of 46.78 from the 1992 Barcelona Olympics.

“It’s my third best time ever and you know running low 47s on the regular is awesome,” Warholm said. “So I’m really happy and this season has been a good experience for me.”

Warholm ran 46.92 in Zurich last year and bettered that in Stockholm last month with a time of 46.87.

The toppling of the longstanding record appears almost inevitable.

“I’m quite used to the talk now and I just got to love it because it shows that I’m in a really good place,” the 24-year-old said. “Just being able to talk about the world record and being that close is an amazing feeling.”

Warholm was more than 1.5 seconds faster than Ludvy Vaillant of France, with Estonia’s Rasmus Mägi third.

No fans were allowed in because of the coronavirus pandemic and that affected the lineups too, with the men’s 100 noticeably lacking some of the high-profile names.

Akani Simbine won in 9.96 seconds, ahead of Arthur Cissé and Filippo Tortu, while double Olympic champion Elaine Thompson-Herah won the women’s event in a world-leading 10.85.

Femke Bol of the Netherlands won the women’s 400 hurdles. Britain’s Jemma Reekie triumphed in the women’s 800 with countrywoman and big favorite Laura Muir only finishing third, behind Hedda Hynne of Norway. 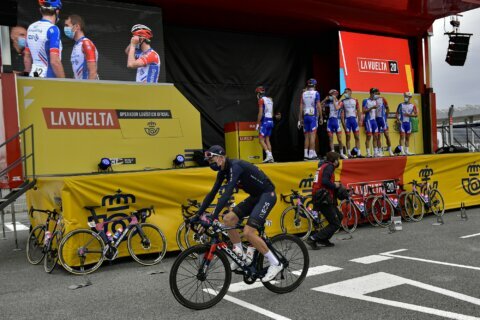 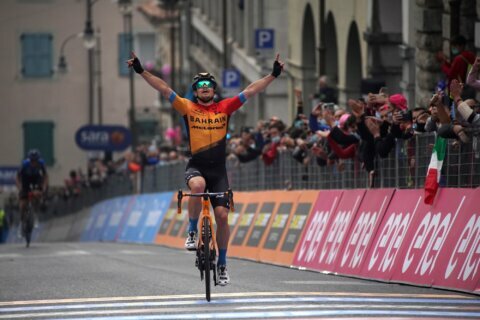