Galaxy wins 3rd straight with 3-2 victory over the Timbers

PORTLAND, Ore. (AP) — Cristian Pavon scored his fifth goal of the season and the LA Galaxy defeated the Portland Timbers 3-2 on Wednesday night.

Efrain Alvarez and Joe Corona also scored for the Galaxy, who have won three straight.

The Galaxy were knocked out of this summer’s MLS is Back tournament in the group stage, but beat both LAFC and San Jose after the league returned to play in local markets.

After winning the MLS is Back tournament title, the Timbers lost to rival Seattle then played to a 4-4 draw to Real Salt Lake last weekend.

Because of the condensed schedule, the Timbers had their regular starters on the bench. That paved the way for goalkeeper Jeff Attinella to make his first start since shoulder surgery last year.

The Galaxy went ahead in the 15th minute when 18-year-old Alvarez scored his first MLS goal in his first start of the season. Pavon added his goal in the 50th.

Felipe Mora closed the gap for the Timbers with a goal in the 67th minute, but Corona answered for the Galaxy less than five minute later.

Jeremy Ebobisse appeared to score for Portland on a header in the 80th minute, but it was flagged as offside and video review did not overturn the close call.

Valeri scored his 80th career goal as Portland scrambled to overcome the deficit. Valeri also has 83 assists. The only two other MLS players to reach the 80-80 mark are Landon Donovan and Jaime Moreno.

The Timbers won the last meeting between the teams 2-1 at the MLS is Back tournament.

The Galaxy were still without Javier Hernandez, better known as Chicharito, who has been out since mid-July because of a calf injury. Coach Guillermo Barros Schelotto said this week he believes Chicharito will return soon. 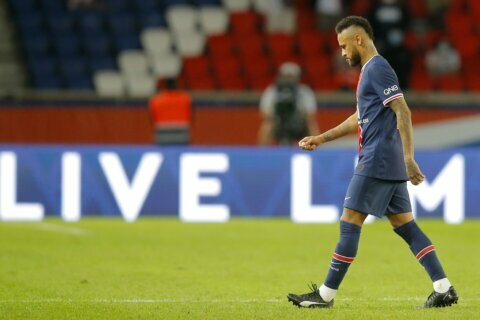