RUTH BADER GINSBURG, 1933-2020: Trump to Senate: Vote 'without delay' on his high court pick | How Ginsburg's death could reshape the election | How to honor RBG by supporting her favorite causes
Home » Sports » Frustration with failure led…

BARCELONA, Spain (AP) — Lionel Messi and Barcelona forged an extraordinary winning combination for more than a decade until cracks in the foundations of the soccer dynasty grew, leading the Argentine great to doubt his future at the club.

Now that Messi is staying for one more year, after an unseemly dispute with club executives, one clear outcome looks like being an awkward season ahead at Camp Nou.

The marriage between player and club appeared perfect. Messi brought one-of-a-kind talent for darting past defenders, along with brilliant passing and scoring goal after spectacular goal. Barcelona provided the coaching minds, world-class teammates, and a playing style perfectly suited to help Messi blossom into arguably the best player the game has ever seen.

But the team’s dominant form dipped as seasons went by and Barcelona’s 8-2 loss to Bayern Munich last month in the Champions League quarterfinals extinguished Messi’s flickering hopes that he could turn things around at his boyhood club. It was the worse defeat in Messi’s career.

After several days of silence, Messi made public what he called the “painful decision” to inform Barcelona that the time had come to leave the club, his home since he was 13. Tellingly, after six Ballon d’Or trophies, a club record 634 goals, and 34 titles, Messi felt his best chances for success lie elsewhere.

Barcelona demanded that he finish the contract that runs until June 2021. It claimed that the clause invoked by Messi to leave had expired on June 10 and said that he had to pay a buyout clause of 700 million euros (around $830 million) if he wanted to depart now. It was a fee too high even for Messi, now 33 and fighting off the twilight of his golden career.

Messi argued that his contract allowed him to opt-out after the extended season but relented on Friday when he said that he would stay since “I could never imagine taking Barca to court since it is the club I love.”

In an interview with Goal.com on Friday — his only public comment since the Bayern defeat — Messi gave no clear indication about his future.

Barcelona president Josep Bartomeu has said that he wants Messi to sign a new contract. But the club is to hold elections in March to replace Bartomeu and it’s unclear if Bartomeu’s “lame duck” season helps or hurts the club’s chances of retaining Messi.

Messi has publicly said he feels betrayed by Bartomeu, who according to Messi had promised him that he could leave for free this summer.

Speculation in the Spanish media sees Messi eventually heading to Manchester City to reconnect with Pep Guardiola, the coach who allowed him to fully flourish.

With Guardiola coaching Barcelona in 2008, Messi’s true potential was unlocked. Guardiola shifted Messi to the heart of the team’s attack, where he could improvise with midfielders Xavi Hernández, Andrés Iniesta and Sergio Busquets. Mesmerizing play, big wins, and trophies followed.

Then came the Luis Enrique era, when in 2015 Messi, Neymar and Luis Suárez led Barcelona to repeat a sweep of the Champions League, Spanish league and Copa del Rey first achieved under Guardiola.

Messi’s failures to reach the equivalent heights with Argentina only reinforced the belief that he had no better club to call home than Barcelona.

But the exit of Neymar, Messi’s friend and heir apparent, for Paris Saint-Germain in 2017 precipitated the team’s decline.

The squad aged and the club’s expensive signings of Ousmane Dembele, Philippe Coutinho and Antoine Griezmann to replace Neymar, Xavi and Iniesta did not pan out.

“I always said I wanted to end my career here,” Messi said Friday. “But I also said that I wanted a winning project. And the truth is that there has been no project or anything like one for a long time. They (the club) scramble to patch up holes as time goes by.”

Messi led the Spanish league in scoring for the last two seasons but the knockout rounds of the Champions League exposed the team’s failings year after year.

Barcelona’s players appeared to lack the fitness, and the mental fortitude, needed in the most demanding matches at the season’s end. First came a 3-0 loss at Juventus in 2017. Next, a 3-0 loss at Roma in 2018, then a 4-0 defeat at Liverpool last season.

After Barcelona relinquished its Spanish league crown to Real Madrid in July, Messi warned that the team was not ready to compete for Europe. But no one, surely not even Messi, could foresee the debacle against Bayern.

Koeman agrees with Messi that the team needs fresh blood. But the Dutch manager still wants Messi to lead the team.

The question is whether Koeman can rekindle Messi’s joy at playing in the blue-and-burgundy colors — and quickly.

“There is a new coach and new ideas, and that’s good,” Messi said. “But we have to see how the team responds and whether or not it will give us enough to compete at the top level.

“What I can say is that I’m staying and I’m going to give my best for Barcelona.”

The Latest: Matsuyama still in contention at U.S. Open 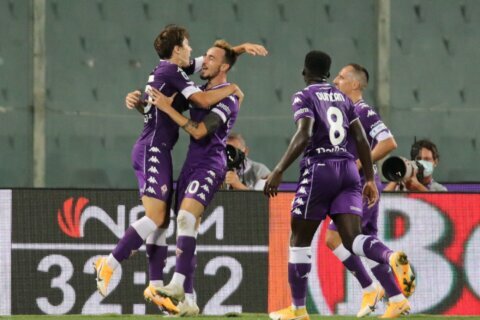