LONDON (AP) — Even the world’s richest soccer league is worried that it can’t function as normal much longer without fans in the stands.

After the British government imposed new pandemic restrictions on Tuesday, the English Premier League warned of the “devastating” financial impact it could have on clubs as supporters faced being locked out of games for another six months.

Sports — including football, rugby and horse racing — have asked the government for financial assistance after Prime Minister Boris Johnson halted plans to allow the phased return of spectators into sporting venues in England from Oct. 1 because of a spike in coronavirus cases.

“Football is not the same without attending fans and the football economy is unsustainable without them,” the Premier League said in a statement. “Last season, Premier League clubs suffered 700 million pounds ($897 million) in losses and at present, our national game is losing more than 100 million pounds ($128 million) per month. This is starting to have a devastating impact on clubs and their communities.”

The government felt compelled to reverse the reopening of society after its top scientific and medical advisers said new coronavirus cases were doubling every seven days.

Infections within the squad at Leyton Orient led to the fourth-division club’s League Cup game against Premier League side Tottenham being called off on Tuesday.

West Ham’s game against Hull did go ahead despite manager David Moyes and players Issa Diop and Josh Cullen being forced to leave the east London stadium and go into self-isolation after receiving positive results ahead of kickoff.

The U.K. on Tuesday recorded 4,926 new virus cases in 24 hours, the highest daily number since early May and more than four times the figure of a month ago. There were 37 new COVID-19 deaths reported, up from single digits a few weeks ago when sports started to test the return of fans at test events, albeit with capacities recently restricted at 1,000.

The Premier League still hopes the government will find a way of safely opening up stadiums to supporters again based on protocols already formulated.

“Fans in stadiums will be as safe or even safer than at any other public activity currently permitted,” the Premier League said. “This is already evident in other European leagues. We are confident that Premier League clubs, using innovative ways to get supporters safely back into grounds, will enable revenues to return to all levels of the game.”

Oliver Dowden, the British cabinet minister with responsibility for sports, met with leagues and governing bodies after Johnson told the House of Commons that the country should return to a normal social or work life for at least six months.

“We agreed to work together to help them through this difficult period,” said Dowden, the culture secretary, without specifying any specific assistance for sports.

The problem is particularly acute in the English Football League, which features 72 professional teams across three divisions below the Premier League and is heavily reliant on fans buying tickets and drinks at games.

Dale Vince, the chairman of fourth division club Forest Green, said it was contradictory of the government to allow pubs and big shops to remain open while not allowing fans into regulated sports stadiums. Forest Green was allowed 1,000 fans on Saturday for the League Two game against Bradford but now there will be no more pilot events for the foreseeable future.

“There are always a handful of clubs that are on the edge anyway, every year,” Vince said. “It is a major additional impact that many clubs will not be able to withstand.”

England’s second-biggest sport is also desperate for stadiums to reopen to spectators.

The Rugby Football Union said it will experience a loss of 138 million pounds in revenue if fans aren’t allowed into England matches over the next six months for the Autumn Nations Cup and Six Nations tournaments.

“Without support,” RFU chief executive Bill Sweeney said in his plea for financial aid, “we are in danger of clubs at the heart of communities across England, as well as players and volunteers, disappearing forever.” 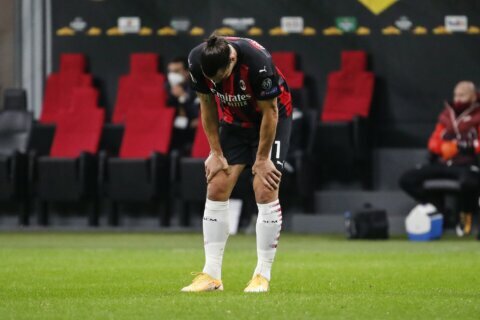