Authentic led all the way to win a Kentucky Derby unlike any other, kicking away from heavy favorite Tiz the Law in the stretch and giving Bob Baffert a record-tying sixth victory on Saturday after the trainer’s other entry was a late scratch.
Listen now to WTOP News WTOP.com | Alexa | Google Home | WTOP App | 103.5 FM

LOUISVILLE, Ky. (AP) — Bob Baffert endured the lowest of lows and highest of highs within minutes in the Kentucky Derby.

He was bummed before the horses left the paddock after Thousand Words reared up and fell on its side, getting disqualified and injuring Baffert’s assistant trainer. That emotion was quickly replaced by Authentic’s front-running victory that gave Baffert a record-tying sixth Derby win.

Then Baffert found himself down again, literally, getting knocked to the grass by a skittish Authentic in the winner’s circle.

“This is the craziest year ever,” he said.

Authentic kicked away from heavy favorite Tiz the Law in the stretch on Saturday, winning the 146th Derby by 1 1/4 lengths without the usual crowd of 150,000 on hand at Churchill Downs for the first time because of the coronavirus pandemic. The bay colt ran 1 1/4 miles in 2:00.61 under John Velazquez, who won his third Derby.

“I’ve had some great Derby rides, but what that guy did,” Baffert said, gesturing toward Velazquez, who stood socially distanced in the infield winner’s circle. “Johnny V. gave him an incredible ride.”

“Bob, he’s got the magic touch,” said Jack Knowlton of Sackatoga Stable, owner of Tiz the Law. “He had this horse ready at the right time and he beat us. Hopefully, we’ll get some more shots at him and we’ll turn the table on him.”

Sent off at 3-5 as the biggest Derby favorite in 31 years and part of a smaller field than usual, Tiz the Law settled into fourth while Authentic ran unopposed in front. With a quarter-mile to go, Tiz the Law pulled alongside Authentic and the two hit the top of the stretch together.

Under Manny Franco, Tiz the Law briefly struck his head in front only to have Authentic fight right back and spurt clear of the Belmont winner, who came in 4 for 4 this year.

“Yes! Yes!” Baffert shouted in the paddock, where he watched on the video screen.

Thousand Words acted up in the paddock, reared up and fell shortly before post time. Baffert said his assistant, Jim Barnes, broke his arm trying to get the saddle on the unruly colt. Thousand Words wasn’t injured, according to the on-call veterinarian.

In the winner’s circle, the long ribbons hanging off the garland of red roses kept hitting Authentic’s hind leg, agitating him, and in turn he knocked the white-haired trainer to the ground.

“He spun around and he was like a bowling ball. He just spun us all around,” Baffert said. “The turf course is pretty soft here, so it wasn’t too bad. I was probably more embarrassed than anything when I hit the ground.”

It’s been that kind of year for Baffert. The Hall of Fame trainer was loaded with promising 3-year-olds early on. Then Nadal got hurt and had to be retired and Charlatan went on the shelf with a minor injury. Authentic had issues, so Baffert gave him an extended break.

In between, Charlatan and another of Baffert’s horses had positive drug tests in Arkansas. Baffert is appealing his resulting 15-day suspension. The trainer mourned the death of Arrogate, North America’s all-time earnings leader, this summer.

“It’s been a roller-coaster year, but thankfully it’s the love of the horses that keeps me going,” said Baffert, his voice breaking. “They’re the best therapy a human can have. I love being around them.”

Baffert was especially pleased to help deliver a first-time Derby victory to B. Wayne Hughes. Hughes, the 86-year-old founder of Public Storage, races as Spendthrift Farm and co-owns Thousand Words. Also part of Authentic’s ownership is MyRaceHorse Stable, whose 4,600 participants include Los Angeles Dodgers pitcher Walker Buehler and former Olympic skier Bode Miller. They paid about $206 each for a share.

Wagering from all sources on the Derby was $79.4 million, compared with $165.5 million on last year’s race. Churchill Downs officials attributed the decline to the absence of on-track wagering, less than a full field of 20 horses in the race and Tiz the Law being a prohibitive favorite.

Tiz the Law had already won the Belmont, the kickoff to the reconfigured Triple Crown that was run in June at a shorter distance. He followed that up with an easy win in the Travers, setting himself up as the dominant horse heading into the Derby.

But Velazquez hustled Authentic out of the far outside post and to the lead. Tiz the Law took up not far behind, positioning himself to pounce in his usual style. But he couldn’t get past Authentic.

“Tiz has been able to pass horses all year and today he ran into one he couldn’t get by,” Knowlton said. ”Credit Authentic. He came from the far outside and managed to get to the lead and just ran a great race. No shame on our part.”

Following Baffert’s instructions, Velazquez used a left-handed whip in the stretch to keep the skittish Authentic’s mind on business. The colt needs ear plugs when he runs.

Without fashionably dressed fans sipping mint juleps and waiting in line at the betting windows, this Derby was unlike any other.

Jockeys chirping at their horses and whips striking flesh in the stretch drive — sounds typically drowned out by raucous fans — echoed across the swath of empty seats under the Twin Spires. Bugler Steve Buttleman played “My Old Kentucky Home” in place of the absent University of Louisville marching band. The song was preceded by a moment of silence to recognize the inequities facing society. Protesters converged outside Churchill Downs demanding justice for Breonna Taylor, a 26-year-old Black woman shot dead in her home in March when police burst in to serve a search warrant in the middle of the night.

The demonstrators were peaceful as they circled the historic track. They chanted “No justice, no Derby!” and carried signs imploring people to say Taylor’s name. Police watched in riot gear with clubs, some on horses and some with armored military vehicles.

“I’d love to be up here pounding my chest because I just won six,” Baffert said, “but I feel for everybody in the city.”

Velazquez was one of several jockeys in the race who wore black bands with the phrase “Equality for all.”

This story has been corrected to show that Honor A. P., not Max Player, finished fourth. Max Player was fifth. 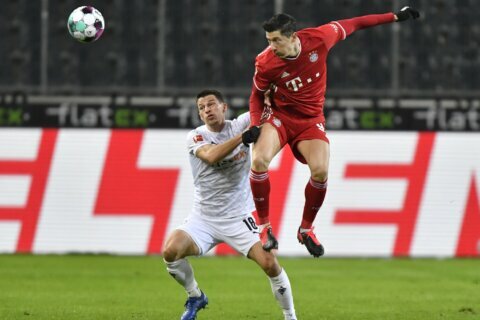 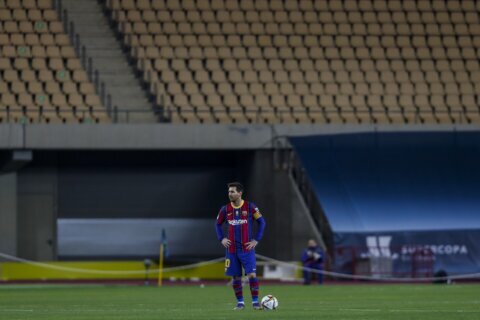