ATLANTA (AP) — Atlanta United is in the process of selling midfielder Pity Martinez to a Saudi Arabian club. The former South American player of the year failed to meet expectations during his time in Major League Soccer.

Martinez was not in the lineup for Atlanta’s 0-0 draw with Inter Miami on Wednesday night.

United will reportedly receive an $18 million transfer fee from Al-Nassr FC for Martinez. That would be a small profit on what Atlanta paid to bring him from Argentina’s powerhouse River Plate club before the 2019 season.

On the pregame show ahead of the match against Inter Miami, United president Darren Eales said “there’s a deal in principle.”

Atlanta’s players learned shortly before the game that Martinez would not be in the lineup as he and the team worked to complete the deal with Al-Nassr, one of Saudi Arabia’s most popular and successful clubs.

“This is the business that we’re in,” goalkeeper Brad Guzan said. “When this stuff happens, you shake his hand, wish him well and get on it with it. Players come, players go, it is what it is. We wish him the best of luck and I’m sure he wishes us the best of luck.”

The 27-year-old Martinez arrived in Atlanta to great fanfare shortly after leading River Plate to the 2018 Copa Libertadores title. He joined a United team that had won the MLS Cup championship and was looking to replace attacking midfielder Miguel Almiron, who left for England’s Premier League.

Despite some promising performances and a pair of titles in the U.S. Open Cup and Campeones Cup, Martinez struggled to mesh with new coach Frank de Boer.

Over 39 league appearances, Martinez had just seven goals. His tenure in Atlanta will undoubtedly be viewed as a disappointment.

De Boer was let go in July shortly after three straight shutout losses in the MLS Is Back tournament. Now, the team is cutting ties with Martinez in what has become a transition year for a club that had immediate success and broke numerous MLS attendance records after entering the league in 2017.

United is 1-1-1 under interim coach Stephen Glass, clearly demonstrating that is no longer one of MLS’ top clubs. Overall in the coronavirus-affected season, Atlanta ranks ninth in the Eastern Conference at 3-4-1 with just seven goals in eight games.

United turned in a sluggish showing against Inter Miami, one of MLS’ two expansion teams, struggling to hang on in the closing minutes. Glass said the news of Martinez’s departure affected the team’s mindset.

“I’m sure that when you’ve got a teammate like Pity and you’re expecting him to play, it’s going to be a disappointment when he’s not a part of your group,” Glass said.

But Guzan said the team can’t use Martinez’s impending departure as an excuse for its poor play. 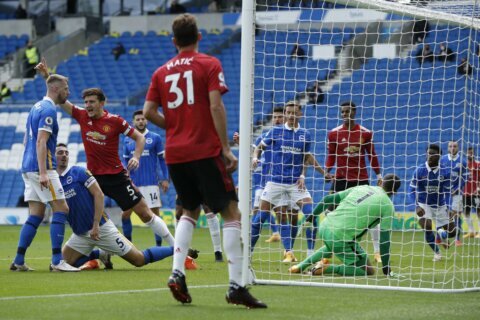 Maguire returns to England squad but Greenwood, Foden out