PARIS (AP) — Not too long ago, Jack Sock was ranked No. 8. Then he went through a series of results he calls “horrific,” leading to doubts about whether he might never again win a Grand Slam match.

Now the 28-year-old American feels his tennis game is back in gear and he has his first French Open win since 2016 to prove it. Up next for the qualifier: a tough test against Dominic Thiem, the man who was the runner-up at Roland Garros each of the past two years and just won the U.S. Open.

“I mean, when you go from top 10 to not winning any matches to the first time in your life, really, on a tennis court, not having much confidence in yourself, I think it’s a massive eye-opener,” the 310th-ranked Sock said Monday after his surprisingly straightforward 6-4, 6-4, 6-3 victory over 36th-ranked Reilly Opelka of the U.S.

Sandgren had been 0-3 for his career in Paris. This victory made him the seventh U.S. man into the second round, the most for the country at the French Open since nine went that far in 1996. Just one American man won a match at the clay-court tournament last year.

Three more can join that group when they play their opening matches Tuesday, when the first round concludes.

“I would say I’ve always been a confident player out there. I feel like if I’m playing good tennis, I can compete against anybody in the world,” Sock said after breaking the big-serving Opelka five times. “To go out and play matches, not have belief in your shots — think that you can lose to anybody at any time — is quite a different feeling.”

After reaching his career high in the rankings in November 2017, when he was a semifinalist at the season-ending ATP Tour Finals, Sock went 9-22 in 2018, then 1-4 in an injury-hampered 2019.

By last November, he had tumbled out of the rankings entirely and was still unranked as recently as February.

“He keeps pounding in your head that: ‘You have been at that level. You are that player. You are that player. It doesn’t just go away.’ Getting the reps in, getting fit in the head, mentally, everything together has given me the confidence on the court again,” he explained. “I feel as good as maybe I ever have out there.”

The No. 3-seeded Thiem advanced Monday with a straight-set win over 2014 U.S. Open champion Marin Cilic.

“I heard he’s pretty good on clay. I heard he played all right a few weeks ago in New York,” Sock joked about the 27-year-old from Austria.

“Probably playing the best tennis of his life or some of (it), winning his first Grand Slam a few weeks ago. I also think I’m a good player. I’m going to stick to my patterns, stick to my game, hopefully try to dictate some points, control some of the match on my racket,” Sock said. “If he’s doing that on his side of the court, moving you around, controlling points, it’s not going to be a very good day against him.”

A year ago, at age 19 and ranked 38th, Marketa Vondrousova arrived at the French Open with a career record of 1-2 at the place. She made it all the way to her first Grand Slam final — she never had been past the fourth round at any major before that — and declared, before losing the title match to Ash Barty: “Best week of my life so far.”

Not quite the same sort of stay in Paris this time. Vondrousva, seeded 15th, was quickly done, ousted Monday by Polish teenager Iga Swiatek 6-1, 6-2 in 63 minutes.

Summed up Vondrousova: “She was just better.”

The last time a French Open runner-up lost in the first round the following year was when Dinara Safina exited right away in 2010.

Swiatek, who had a 23-7 edge in total winners, said she was pleased to have fulfilled the goals she set for herself: to stay focused and consistent.

Zhang Shuai not only ousted 2017 semifinalist Madison Keys from the first round of the French Open, beating the 12th-seeded American 6-3, 7-6 (2), she also set herself apart from plenty of other players by having only positive things to say about the autumnal conditions making Roland Garros unique this year.

The 39th-ranked player from Tianjin, China, gushed about experiencing Paris outside of the usual May-June slot for the French Open, even though she’s been confined like all players to one of the two tournament hotels.

“To be in Paris in autumn, it’s such a fantastically beautiful season and so rare to come here at this time,” she said.

The 31-year-old failed to win a match at Roland Garros in her first five attempts. But she’s always advanced out of the first round in her five French Opens since, with her best showing so far a third-round appearance in 2017. 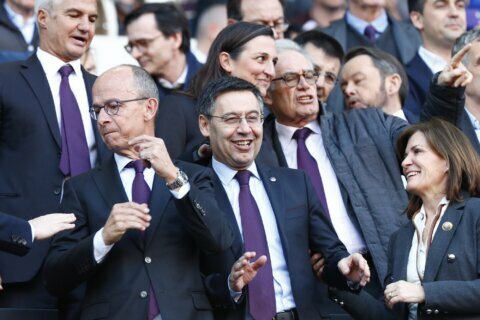