A rough start and the search continues for Jordan Spieth

MAMARONECK, N.Y. (AP) — Two holes into the U.S. Open, Jordan Spieth had reason to believe it might be a long day and a short week.

From the fairway, he came up short enough for his shot to come back down to the front of the green and three-putted for bogey. Then, he figured he would be have to scramble for par on the second hole until he got to the location of his drive and learned his ball never came down from a tree.

Tiger Woods, Justin Thomas and Collin Morikawa were on the tee when Spieth arrived in a cart with a driver in his hand to play his third shot. He made double bogey and was 3 over.

The good news? It never got any worse.

“I ended up finishing even after the second hole,” Spieth said. “Tough break early. All in all, shooting 3 over at a U.S. Open feeling like I had no control, it’s not bad.”

The struggle continues for Spieth, and he was open about it after his round.

“Standing on a tee at the U.S. Open and not exactly knowing where the ball is going to go is not a great feeling,” Spieth said. “I know you guys probably haven’t experienced that before, but it’s not incredibly enjoyable. But I’ll grind it out. I don’t ever give up. I have no reason to. I’m here. Even with not having much tee-to-green, I can somehow still shoot an even or under par round on this course, and that’s incredible self-belief in the grind.”

And it was a grind. He got back to even-par at the turn only to give it back quickly. It took him four shots to get down from the front of the green on the par-5 12th in making a double bogey.

The 165-yard seventh hole at Winged Foot had an inviting hole location for the opening round.

Enough to produce a pair of aces and several near misses.

Patrick Reed had the first ace, one-hopping a 9-iron directly into the cup. Later in the round, Will Zalatoris landed a 9-iron shot in the middle of the green and watched the ball trickle into the hole.

Both players had delayed reactions to the aces, waiting to verify their balls went in the hole because there are no fans on the course.

“Up here in New York, the fans are amazing,” said Reed, who’s tied for second after shooting 66. “You go ahead and you hole out from the fairway, you make a hole-in-one, the fans will just go crazy. It was unfortunate the fans weren’t here because that would have been an awesome experience. But at the same time, an ace is an ace. I’ll take it either way.”

The last time a U.S Open had multiple aces on the same hole was four at Oak Hill’s sixth hole in the second round. Scott Hoch and Andy Miller each had aces on different holes in the final round at Bethpage Black in 2002.

Zalatoris nearly had a second ace when his 6-iron on the 13th hole hit the flagstick and somehow rattled out of the hole.

Steve Stricker and Matthew Wolff also had near misses at No. 7.

Amateurs Davis Thompson and John Pak got off to solid starts, each shooting 69 to tie for 14th.

They were the only two of the 13 amateurs in the field to finish under par in the opening round.

Thompson, a junior at Georgia, ran off three straight birdies on the front nine and added another on No. 11 to take the lead at 4-under. Three bogeys in a five-hole stretch of the back nine dropped him to 1-under.

“I was a little nervous, but once I hit that first tee shot, I think I was ready to roll,” Thompson said.

Pak, a Florida State junior, got off to a good start with birdies on 14 and 15 after starting on No. 15. He bogeyed No. 2 and took double on 3 after hitting short left and three putting.

Pak grew up about an hour south of Winged Foot in Scotch Plains, New Jersey, and had played the course a few times before the U.S. Open.

“I’m a little familiar with the golf course,” he said. “It feels nice to play in the Northeast golf again. I think this is some of the best golf you can play.”

Justin Thomas was missing putts and wasn’t sure why. That led to a new coach in his camp, John Graham, who specializes in reading greens. Thomas says he continues to work with his longtime short-game coach Matt Killen, along with his father, club pro Mike Thomas.

He start to spend time with Graham this summer and realized his problem stemmed from reading greens and visualization.

“It’s not like I’m going out and doing mechanical stuff,” Thomas said. “It’s just trying to kind of get the muscle memory of hitting the putt as far as I want to and feeling comfortable playing different breaks and almost kind of creating shots, if you will, but on the putting green. That’s just something that as much of a feel player as I am, it’s been really helpful.”

It was helpful Thursday in his round of 65. It’s his first lead in a major since he won the 2017 PGA Championship. 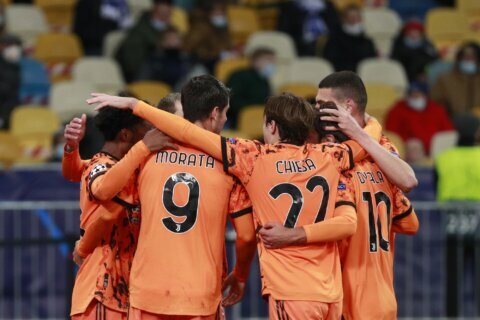