Alaphilippe attacked on the Poggio climb shortly before the end of the 305-kilometer (190-mile) route and Van Aert caught him on the descent.

The race — one of cycling’s five single-day “monuments” — was originally scheduled for March.

It was the second win in a week for Van Aert, who also won the Strade Bianche race last weekend.

Van Aert, who rides for the Jumbo-Visma team, required 7 hours, 16 minutes to complete the lengthy route ending along the Italian Riviera.

Alaphilippe finished with the same time while Michael Matthews of Australia crossed third with the main pack, two seconds behind.

“It’s unbelievable to win Milano-Sanremo after Strade Bianche. On the Poggio, I was at the limit. Alaphilippe attacked earlier than I expected and I couldn’t hold his wheel so I had to go and chase him down,” said Van Aert, a three-time cyclo-cross world champion and the winner of a stage in last year’s Tour de France. “He played it very well. Luckily I just had enough power left to beat him on the line. It’s a beautiful restart of the season for me.”

The next “monument” race in the revised schedule is the grueling and hilly Lombardia next Saturday. 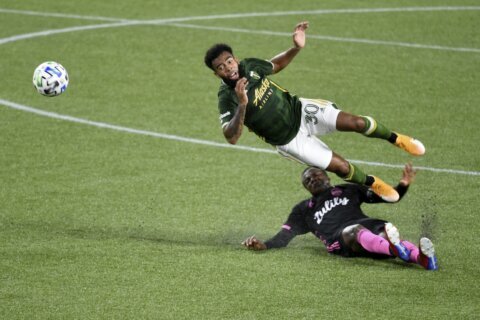