Suárez, Rakitic, Vidal and Umtiti could be leaving Barcelona

MADRID (AP) — With or without Lionel Messi, incoming Barcelona coach Ronald Koeman seems to be clear about who won’t fit into his squad next season.

Among them are some key players from recent years, including Luis Suárez, Arturo Vidal, Ivan Rakitic and Samuel Umtiti.

Messi told the club on Tuesday he wants to leave, but there could still be a legal battle ahead over a clause in his contract.

Neither the club nor the coach have said publicly who is staying and who is leaving, but those four players reportedly have already been told that they are not in Koeman’s plans.

Their departures would certainly be part of the “profound” changes to the first team that the club announced after its season ended with a humiliating 8-2 loss to Bayern Munich in the quarterfinals of the Champions League.

President Josep Bartomeu and Koeman had said they wanted Messi to stay, but both acknowledged that there was a need to revamp an aging squad that left the club without a title for the first time since 2007-08.

The club’s restructuring began with the firing of coach Quique Setién a few days after the loss to Bayern, and new presidential elections were called for March.

Catalan radio station RAC1 said Suárez was one of the first to get a call from Koeman saying he wasn’t going to be used anymore. The 33-year-old Uruguay striker joined Barcelona from Liverpool in 2014 and helped the Spanish club win a series of titles, including four Spanish leagues, four Copa del Reys and one Champions League. He scored nearly 200 goals in more than 280 appearances with the club.

“Never forget that you are the architect of your own destiny,” Suárez posted on Instagram recently.

Among the players touted as possible replacements for Suárez were Lyon’s Memphis Depay and Inter Milan’s Lautaro Martínez. Already on the team and ready to contribute in attack are Martin Braithwaite and youngster Francisco Trincão.

Also reportedly getting the call from Koeman was the 32-year-old Rakitic, the Croatia midfielder who also arrived in 2014 after a long stint with Sevilla. Rakitic was a regular starter throughout the years but hadn’t been getting as many minutes recently.

Young Dutchman Frenkie de Jong joined the club last year and Barcelona will also be counting on Miralem Pjanic, who was signed from Juventus in a trade involving Arthur.

The 33-year-old Vidal was set to leave after only two years with Barcelona. The Chile midfielder had been playing more often than Rakitic but could also lose space with Pjanic’s arrival.

“When you cage a tiger, it doesn’t give up, it fights,” Vidal said on Twitter on Tuesday.

The fourth player reportedly out was Umtiti, a 26-year-old central defender who has struggled with a series of injuries since joining Barcelona from Lyon in 2016. Clément Lenglet had been the regular starter in defense along with captain Gerard Piqué.

The 33-year-old Piqué was the first to call for a major restructuring of the club after the loss to Bayern, saying that if needed he himself would be willing to step aside to help the club.

There were still doubts about the future of Sergio Busquets, Jordi Alba and Sergi Roberto.

The youngsters who have already been contributing include Ansu Fati and Riqui Puig, while Carls Aleña is due to return after a loan with Real Betis. Among the youngsters joining the club this season are Pedri, Matheus Fernandes and Gustavo Maia.

The squad changes are expected to help Barcelona financially, as the club was hit hard by the coronavirus pandemic.

Barcelona finished second to Real Madrid in the Spanish league. 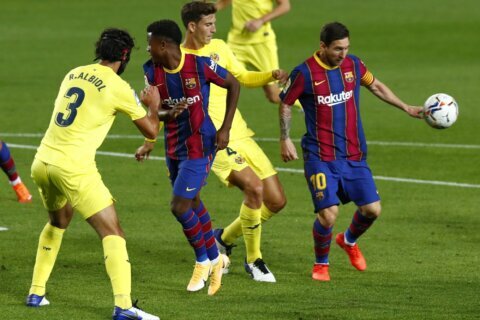 Koeman praises Messi for making call for unity at Barcelona