SOUTHAMPTON, England (AP) — Mohammad Rizwan scored a gritty, unbeaten half-century to guide Pakistan past 200 against an increasingly frustrated England before bad light at the Rose Bowl brought an early end to the second day of the second test on Friday.

The teams went off the field before tea because of the gloom, with Pakistan on 215-8, and reappeared for only another nine balls, during which Stuart Broad took his third wicket of the innings and the tourists moved to 223-9. The umpires took another meter reading and took the players off again — for good this time.

Rizwan will return on Saturday on 60, the wicketkeeper’s second-highest test score, alongside Naseem Shah (1).

England looked all set on wrapping up the Pakistan innings, which resumed on Friday on 126-5, after star batsman Babar Azam (47) edged behind a brilliant ball from Broad that seamed and squared up Babar.

That made the score 158-6 and two more wickets fell for 18 runs, with Yasir Shah (5) flashing at a delivery from Jimmy Anderson and edging to give wicketkeeper Jos Buttler another catch. Shaheen Afridi (0) was run out by Dom Sibley at the non-striker’s end after a mix-up.

England’s seam bowling unraveled in the final half-hour before the enforced tea, with the field set by captain Joe Root perhaps too negative under threatening skies and with two lower-order batsmen in the middle. On occasions, there were five or six out near the boundary as Root spread the field.

Broad came out in defense of his captain.

“If you bring all the field up with a batsman in on 60, you can leak 30-40 runs really quickly,” he said. “What you don’t want is five balls at the in-batter and then they get one off the last.

“But you lose intensity when everyone is on the boundary, you’re just hoping for a mistake. So it’s a tricky one. If someone gets in and starts playing awkwardly, it can be tricky.”

Anderson has the best bowling figures, with 3-48. Broad had 3-56 to continue his brilliant form this summer after being left out of the first test of the series against the West Indies last month.

“It’s the sort of form and confidence you almost want to wrap up in cotton wool and take everywhere,” Broad said.

“In this game, I’ve felt a bit unlucky and felt I could have got a couple more wickets. I’ve got a clear game plan to try and wobble the ball and hit the stumps as much as possible. I’ve been getting a bit of movement away as well.”

The tourists trail 1-0 in the three-match series after losing the first match by three wickets in Manchester. Another victory for England will clinch a first test series against Pakistan in 10 years, and a second series of this pandemic-affected summer having already beaten the West Indies. 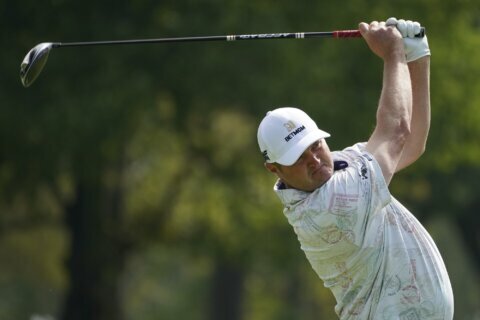 Kokrak remains in hunt at U.S. Open with steady second round