OLYMPIA FIELDS, Ill. (AP) — With so few people around, Jon Rahm still got word from the other side of…
Listen now to WTOP News WTOP.com | Alexa | Google Home | WTOP App | 103.5 FM

OLYMPIA FIELDS, Ill. (AP) — With so few people around, Jon Rahm still got word from the other side of the Olympia Fields clubhouse that Dustin Johnson had made a 45-foot birdie on the final hole to force a playoff Sunday in the BMW Championship.

Resilient as ever, Rahm went out and made some magic of his own.

From one end of the 18th green to the other, Rahm’s putt from just over 65 feet rolled down the ridge and into the cup, setting off a roar so loud it nearly made up for not having spectators.

Johnson could only laugh at his birdie putt, eliciting a rare show of emotion — a slow, sweeping upper cut. And he had the same reaction to what Rahm did. What else is there to do?

The course that all week felt like a U.S. Open delivered the kind of excitement typical of the Masters.

Rahm’s big birdie putt on the first extra hole spared him thoughts of his blunder in the third round, when he picked up his ball on the fifth green without marking it, leading to a one-shot penalty and his only bogey of the weekend.

He tore through the back nine Sunday on his way to a 6-under 64, the lowest round of the week, to finish at 4-under 276.

Johnson, a 54-hole leader for his third straight tournament and coming off an 11-shot victory last week at the TPC Boston, birdied three of his opening four holes to open a three-shot lead, dropped a pair of shots around the turn and then delivered in the clutch with his 45-foot birdie putt on the last hole for a 67.

It was only good enough to stay at No. 1 by a slim margin.

He also stays at No. 1 in the FedEx Cup going to the Tour Championship, meaning he will start the chase for the $15 million bonus at 10-under par, two ahead of Rahm, the No. 2 seed.

Rahm won for the second time this year on the PGA Tour, and the 11th time in his career worldwide.

Mackenzie Hughes had reason to celebrate, too. He was on the verge of playing his way into the top 30 who advance to East Lake when he took a sloppy bogey on the 17th. Needing a par on the 18th, he put his approach into the front bunker, splashed out to 5 feet and raised both arms when it dropped.

Niemann also moved into the top 30, though he was chasing victory all day.

The top 30 are assured spots in at least three majors next year, along with the Sentry Tournament of Champions at Kapalua to start the year. The winners-only event is taking the top 30 in the FedEx Cup from having lost three months of the season to the COVID-19 pandemic.

Tiger Woods missed all the action. He made double bogey on his 17th hole for a 71, making this the first time he was over par in all four rounds of a tournament since the Bridgestone Invitational in 2010. Woods failed to reach the Tour Championship for the second straight year. He now gets two weeks off before the U.S. Open at Winged Foot, and Olympia Fields proved to be a good test for that.

ROGERS, Ark. (AP) — Austin Ernst rallied to win the Walmart NW Arkansas Championship for her second LPGA Tour title, closing with an 8-under 63 for a two-stroke victory over Anna Nordqvist.

Four strokes behind Nordqvist entering the round, Ernst had the best score of the day, making 10 birdies and two bogeys at Pinnacle Country Club. She joined 2014 champion Stacy Lewis as the event’s only American winners.

Nordqvist closed with a 69 after opening with rounds of 64 and 62 to take a three-shot lead into the final day.

Ernst opened with consecutive 65s to put herself in position to win for the first time in 144 starts since the 2014 Portland Classic. The 28-year-old former LSU player also won the 2011 NCAA individual title.

Nordqvist, the 33-year-old Swede with two major titles and six other LPGA Tour wins, also bogeyed the par-4 12th — her first dropped stroke of the week. She played the four par-5 holes in 1 over, while Ernst birdied them all.

BIRMINGHAM, England (AP) — Danish teenager Rasmus Hojgaard overcame a five-shot deficit with a 7-under 65 and won the U.K. Championship at The Belfry on the second playoff hole against Justin Walters of South Africa.

The 19-year-old Hojgaard won for the second time this season, following his victory in the Mauritius Open late last year that made him the first European Tour winner born after 2000.

Walters closed with a 70 and ran out of crucial putts. He holed a 4-foot par putt on the 18th hole in regulation that caught the right edge of the cup and curled in. He holed a 10-footer for par on the first extra hole at the 18th to extend the playoff. But he was well right of the 18th green the next time, pitched to 15 feet and missed the par putt.

Martin Kaymer was tied for the lead until a poor chip led to bogey on the par-5 17th hole. Kaymer missed a 15-foot birdie putt on the final hole to get into a playoff. He shot 69. Kaymer has not won since his eight-shot victory at Pinehurst No. 2 in the 2014 U.S. Open.

NEWBURGH, Ind. (AP) — Brandon Wu overcame a five-shot deficit with a 7-under 65 to win the Korn Ferry Tour Championship.

The 23-year-old Wu won in his sixth Korn Ferry Tour start of the season and eighth of his career He tied for second two weeks ago in the Boise Open.

Third-round leader Greyson Sigg was a stroke back after a 71.

Sigg and McCarthy will join Wu at the U.S. Open after securing their spots Sunday. Stephan Jaeger and Curtis Luck will round out the five players who earned a spot in the field through the Korn Ferry Tour Championship Series.

Joe Long never trailed and pulled away midway through the afternoon round to win the British Amateur at Royal Birkdale with a 4-and-3 victory over Joe Harvey. The victory makes Long exempt next year for the Masters, U.S. Open and British Open. … Emily Kristine Pedersen made an 80-foot eagle putt to cap off her four-shot victory over Christine Wolf on Sunday in the Czech Ladies Open. It was Pedersen’s second career title on the Ladies European Tour. 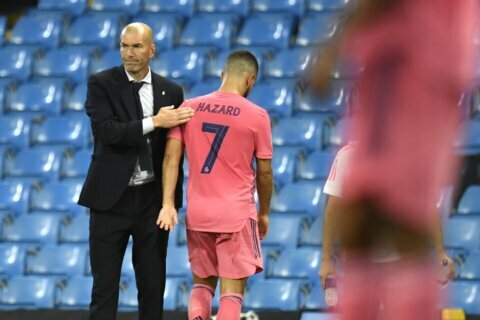